Shannon “Sam” Waldo passed away on April 11, 2021, at the age of 94.  She was a tiny human being with a massive presence and a twinkle in her eyes. At the age of two, the story goes, although she had not walked or talked, she was on a camping trip with her family and as she came out of the tent she surprised her mother who asked “Who are you?”, to which the verbal reply was “My Sam.” That title stuck with her for life.

She left behind a legacy of community service and untiring effort for the many organizations blessed by her attentions. She lived in Berthoud for 53 years and taught Sun 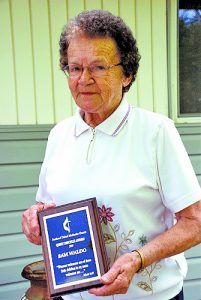 day School at the Berthoud United Methodist Church for 50 years. The Peaks sub-district of the Rocky Mountain Conference of the United Methodist Church honored Waldo in 2009 with the “Quiet Disciple Award” for her work teaching Sunday School.  The projects and organizations she volunteered at range from the Senior Center, Meals on Wheels, the Lions club, the famous Kitchen Band at the Senior Center, Berthoud Elementary Accountability Committee, Foundation on Aging for Larimer County, Weld County Schools Credit Union, supervisory committee, Berthoud Area Transportation Service (predecessor to RAFT) to Special Olympics swim coach.

Her official working life was mostly spent at the Weld County School District Re-5J, where she worked for 29 years as the administrative assistant to the superintendent, and a school secretary at Letford Elementary. During her time at the school district, she also served as secretary-treasurer of the chamber of commerce for 12 years, and as treasurer of the recreation committee. One year she took the reins of the district when the superintendent quit, in the middle of construction of the Milliken Elementary and remodeling of Letford Elementary and the hiring of three principals.

After retiring in 1990 from the Weld School District her volunteer schedule continued, and she fit in a part-time job with the Larimer County Parks at the Carter Lake administration center and added the Little T Preschool to her volunteer roster. Although any normal person would not have time to recreate and do all the community service that Sam took on, she also loved camping, spending time with her children and grandchildren and bowling.

Sam never stopped thinking of others, and until the pandemic hit she was still out and about doing her magic. From retrieving shy toddlers from the arms of their harried mothers during church services to playing music on kitchen implements and cooking for hundreds of people, she kept moving and kept giving. Her example shines and her warm and humorous presence is greatly missed.

Sam married George Waldo in Iowa and they moved to Colorado where they were married for 47 years. Her two sons, Mike of Berthoud and David of Springfield, Maryland, as well as her three granddaughters and three great-granddaughters, were the highlights of her life.