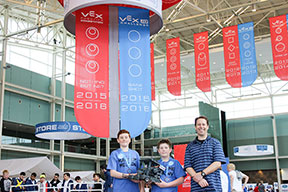 Local robotics team 1069H Mainframe Meltdown, a middle-school division team from Berthoud Robotics Club, recently had the experience of a lifetime as they participated in the annual VEX Worlds Robotics Competition in Louisville, Ky., on April 20 – 23, and would like to thank their local sponsors Micron and Southpaw Nail Care Studio for their generous donations that helped make this experience possible.

The team has been working for many months designing, building and programming a robot that overcomes certain obstacles and completes a special set of tasks as part of a global challenge designed by VEX Robotics Inc. The challenge changes each year. The team has competed at various local competitions where they were awarded: Team Challenge Award and Autonomous Robot Programming Award. These awards qualified the team to go to the state championship where they won the highest award: Excellence Award, which qualified them to compete at the world championship where they competed with over 1,100 teams from 31 nations around the world. Teams were randomly matched in 11 different alliance pairs during the four-day event. The goal of each match was to work with their alliance team to score as many points as possible. This means alliance teams from different countries and cultures had to work together to strategize and use the strengths of each of their robots to maximize their combined score. Teams from countries where English is not spoken had interpreters to help with communication. Mainframe Meltdown was matched with teams from Paraguay, China, Mexico, and several other U.S. states. It was wonderful to see kids work together to achieve a common goal.

Berthoud Robotics Club is open to all middle-school and high-school students. Sign-ups are at the beginning of each school year.  More information is available at berthoudrobotics.org and vexrobotics.com