It’s predictable holiday fare but a notch-up from Hallmark movies, it’s based around a true story and is appropriate for everyone in the family to watch. The movie is Operation Christmas Drop and it is available on Netflix.

The story. A power-hungry senator (Virginia Madsen) sends her ambitious aid Erica Miller (Kat Graham) all the way to Guam the week of Christmas to do some recon with the goal of shutting down anything that could slash military spending after catching wind of a superfluous Christmas event held at the base located there. Miller ready to advance her career sets family aside for the holidays and makes her way to the South Pacific Island and Andersen Air Force Base where the movie was actually filmed.

We are then predictably introduced to the tall and handsome Capt. Andrew Jantz (Alexander Ludwig) his chiseled jawline and his unflappable Christmas spirit. Capt. Jantz oversees the program in question Operation Christmas Drop and is assigned to show Miller around in an attempt to dissuade her from her mission to write up a negative report. 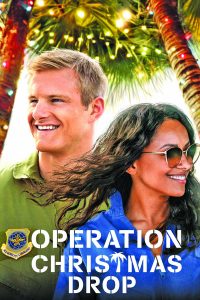 As it turns out Operation Christmas Drop really is the longest-running U.S. Department of Defense’s humanitarian airlift operation that has been going since 1952. The program is a Pacific Air Forces (PACAF – because the military likes acronyms) event that includes partnerships between Yokota Air Base, Japan; the 36th Wing, Andersen Air Force Base, Guam; 734th Air Mobility Squadron, Andersen AFB of the 515th Air Mobility Operations Wing, Joint Base Pearl Harbor-Hickam, Hawaii; the University of Guam; and the ‘Operation Christmas Drop’ private organization which leads the fundraising and donations for the operation. You’ll get to see real pictures through the decades of the operation if you wait until the credits.

Utilizing the Denton Program, which allows private U.S. citizens and organizations to use space available on U.S. military cargo planes to transport humanitarian goods to countries in need, the C-130J Super Hercules crews airdrop supplies to islanders throughout the Commonwealth of the Northern Marianas, Federated States of Micronesia, and Republic of Palau. These islands are some of the most remote locations on the globe cut off from resources most of us take for granted, are often hit with natural disasters and span a distance nearly as broad as the continental US.

Back to the film. The two leads predictably clash and bicker but figure out that they really like each other. Eventually, Miller is shown how important humanitarian aid is to the islands and the people they serve and her grinchy heart grows 10 times larger. Of course, there is some more conflict that comes their way in order to save the program, but you’ll have to watch the film to see how it plays out.

If you want a cheesy Christmas movie that will leave you feeling good this is a great movie to watch or have on in the background while you wrap gifts. Make sure to keep an eye out for Brother Bruce a real volunteer who has worked with the drop for 40 years and also happens to run the only telecommunications radio network to the remote islands.

After watching the film if you are in a giving spirit you can make a donation to the cause by visiting operationchristmasdrop.com/donate-now.