“Top Gun: Maverick” is a feast for the eyes

“Top Gun Maverick” is a powerhouse of action and incredible images sweeping the movie scene. The sequel to the original 1980s blockbuster “Top Gun” takes place 30 years after the original film. It is stuffed full of unforgettable scenes filmed in actual jet planes and not done in a studio, something rare in this digital age. The idea of filming in the cockpit with the actors makes those scenes have an incredible sense of realness that CGI cannot duplicate. The film is a treat to watch. There are plenty of aerial combat sequences to satisfy even the most ardent jet plane fan. “Top Gun Maverick” has plenty of eye candy for everyone, Cruise looks remarkably fit and much younger than his age of 57 (at the time of filming), and everyone else is model-perfect gorgeous. The landscapes are beautifully captured. There are fantastic scenes of jet planes swooping and dogfighting, training sessions, and an action-packed finale rivaling the original film. Of course, there is the required shirtless pilots playing a game on the beach scene and Tom Cruise having a beautiful girl on his arm that you would hope to see in a sequel to “Top Gun.” Seeing the planes and what they are capable of is exhilarating. 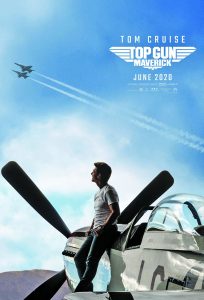 Still, I can’t help but think the film is missing something. I remember seeing “Top Gun” several times (yes, I’m old enough to have seen the original in the theater.) One of the things I loved in the original was how many stories were going on within the plot. You got to know more than just Tom Cruise as Pete and his love affair with Instructor Charlie (Played by Kelly McGillis). The story had some grit to it, and you cared about the competition, who the pilots were, and what they were about. In “Maverick,” the story barely touches on the other Pilots. Yes, there is some rivalry and a little back story. But it doesn’t feel fleshed out. Several of the pilots clearly have backgrounds that would have been interesting to know more about and thus care why they are there. The one lone female pilot and her co-pilot had hints of great stories, yet nothing was ever expanded upon. It was evident from the beginning the outcome of who will go on the mission and the one love entanglement, played nicely by Jennifer Connelly, is, for the most part, played safe with no real conflict. If the film had had a little more meat to chew on, “Top Gun Maverick” would have gone from great to extraordinary. Also in today’s warfare, I wonder if such a mission would have involved using drones, keeping the danger at a minimum, and making this movie’s plot unnecessary.

All that being said, I really enjoyed watching “Top Gun Maverick” It brought about many memories of seeing the first one and how much I enjoyed seeing a film in the theater. It’s worth going out and having that buttered popcorn and maybe some junior mints as you enjoy a fabulous feature film on the big screen. Taking on a sequel of a legendary film that is still popular today can be daunting, and director Joseph Kosinski proved up to this monumental task. His direction produced what fans of the original and new fans that were not even born when “Top Gun” took over the box office in 1986 hoped for: Lots of jet planes, great locations, and plenty of non-stop action with some eye candy thrown in.

The cinematography is done beautifully by Claudio Miranda and dazzles with plenty of incredible imagery. With a look and feel that compliments the original blockbuster. The film is genuinely meant to be seen on a large screen with delicious shots of Jet fighters, Cruise on his iconic motorcycle, pilots, and California sunsets to dream about. “Top Gun Maverick” is packed with references to the original film all over the place, and many will make fans of the first film smile or chuckle. There is a fantastic inclusion of Val Kilmer reprising his Iceman character now with throat cancer which the actor is in remission in real life.

As with the first one, this will undoubtedly increase recruitment for military pilots. According to The Navy, “Top Gun” increased interest in joining the Navy by a whopping 500%! “Top Gun Maverick” is one to see at the theater. The sights and sounds can only be fully enjoyed on the big screen with big sharp images and fantastic speakers. The filming in the cockpits of the jet fighters was a fantastic choice that brings the film to great heights, and you will leave with a smile on your face from the experience.