Library CEO encourages people to check out the library 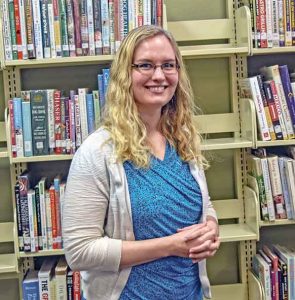 Berthoud Community Library CEO Amie Pilla has had a good first year as the head of the library. She is also the newly elected Berthoud Area Chamber of Commerce board president.
Bob McDonnell / The Surveyor

Berthoud Community Library District Chief Executive Officer Amie Pilla has been in her position for one year, and things have gone well during this time. After the first year, she knows she made the right decision to relocate.

Pilla, who was interviewed for the job via Skype, is glad she made the move. “A perfect opportunity,” is how she characterized her job at the library in Berthoud.

The attraction of a move to Berthoud for Pilla was that she has family in the area. She and her husband Lenny moved from Atlanta. They now live in Berthoud, along with their two dogs.

Pilla not only took on the leadership of the library, but she also got involved in the town. As of January 2017, she is serving as president of the Berthoud Area Chamber of Commerce.

Pilla is glad to see users of library services come in many forms. She has notices that this includes families, young professionals, those in mid-career, retired adults, and home-schooled students.

The library grew in Pilla’s first year at the helm. A recently-produced annual report shows the number of card holders jumped by almost 500, to the current level of 6,554.

Pilla quickly stated any success for the library is not just her doing. She acknowledges her staff of six people for doing a lot of the hard work. The staff is supplemented by a volunteer force of 40 people.

Although the library in Berthoud is not huge, it does house some 25,000 books on its shelves. Pilla said, through the AspenCat Library union catalog, a consortium of 104 other libraries, local patrons have access to 1.2 million additional books. AspenCat is run by the Colorado Library Consortium. This includes works from public and school libraries as well as academic ones.

This vast number of books all show up when someone does a search on the library’s website. The site lists whether the books are stored locally or have to be brought in from one of the 104 other libraries in the system. “We don’t have to own everything we offer,” Pilla said.

Many do not know the library is an official event center for Small Business Saturday– the day after Black Friday. The library offered free gift wrapping for anything purchased in town that day.

Pilla sees heavy usage by visitors on the library’s computers. “Computer use is huge,” she said. The library increased their bandwidth this past year to accommodate the increased demand, according to Pilla.

With more people going away from printed books, the Berthoud library offers downloads of electronic books for those with a valid library card. Additionally, the library has access to computerized research material.

Another service available to locals is a free meeting space at the library. This room is available for any gathering where there is no charge to attend. For ongoing meetings a group can book two months at a time.

Although things have gone well in Pilla’s first year, new programs and services are being added all the time. Pilla says they are getting ready to relaunch the 1000 Books Before Kindergarten program. The idea is to get kids ready for school. Children should have heard 1,000 books before they start school. The library will have an incentive program for parents and caregivers to keep track of the books they read to children.

Pilla notes she and the staff are seeing a shift in public libraries in general, from being repositories to being a place where people create things. With this in mind, adult library users can look forward to the rollout of something called curiosity kits for adults. These are bags of materials to help to try out a new hobby. “This is a way to dip your toe into a hobby to try it without buying all the supplies,” according to Pilla. The subjects of the kits range from knitting, to doing architectural drawing, or how to assemble circuits.

Many do not know the library offers faxing and document scanning for free. In the next few weeks, two library staff members will be certified to notarize documents too, Pilla stated.