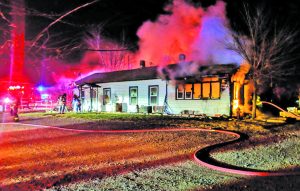 At 7:25 p.m. on Dec. 11, 2018, Berthoud Fire Protection District was dispatched to a structure fire in the 2200 block of Weld Country Road 3 in Berthoud. Upon arrival, crews reported a visible active fire on the southeast corner of a small single-family residence. There were other neighboring structures and homes that were at risk. It was unconfirmed at the time whether the homeowner was inside of the home. Due to the potential life risk, firefighting crews took an offensive attack and went to the interior of the home to clear the building of occupants. The building was cleared, and no one was found inside.

A neighbor, Amber Pollock, sent Jones a Facebook message at 7:28 p.m., “Are you home? What is your cell? Please call ASAP.” Another neighbor went to the house and could hear the dog crying. He broke the window and tried to get in, but the room was engulfed in smoke and fire. 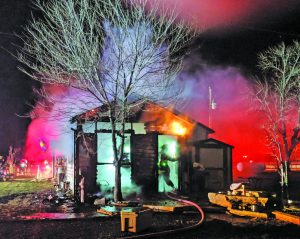 Jones came into the Surveyor office on Wednesday morning and said, “I don’t know what to say, the kitchen and mudroom were destroyed. The roof was extensively damaged, and the rest of the house is in pretty bad shape. I have received so much hospitality from the community, Grace Place and Crossroads churches, and so many offers for a place to stay, food and whatever I need. I want to thank the community for their support and offers to help. I’m okay, and as a single guy will be able to manage, but if I had a family it would be more difficult. I own a construction company, so I don’t have to call in sick, go out and buy clothes for kids, or figure out where to live. It’s not going to impact me like it would a family. I also have my whole family here, around Berthoud, for support.”

The fire was extinguished, and firefighters were able to contain the fire to the east side of the home, with some fire extension to the attic and exterior of the structure. The rest of the home will have signifi cant smoke and heat damage. Crews remained on scene for several hours to put out remaining hot spots, ventilate the home of smoke, and begin initial investigations.

Origin of the fire is unknown at this time and will be under investigation. Berthoud Engine 1, Engine 2, Engine 11, Squad 11, Chief 1, Chief 2, and PIO were on scene. Other responding units included Loveland Engine 1, Engine 3, Battalion 1, Chief 3 and Water Tender 3, as well as Thompson Valley EMS paramedic 331 and Weld County Sheriff’s Office.