Dreaming of a White House Christmas 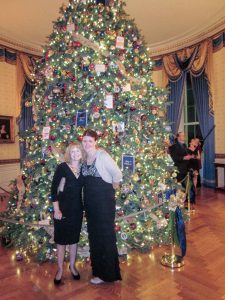 Carin Barrett, right, poses in front of the White House’s official Christmas tree, along with fellow Berthoud High School teacher Ann Gonzales who accompanied Barrett to the volunteer reception for those who decorated the house for the holidays. Barrett was one of 76 volunteers selected to help decorate the White House for the Christmas holiday this year. All photo courtesy of Carin Barrett / The Surveyor

Berthoud High School social studies teacher, Carin Barrett, spent her Thanksgiving this year doing something a little different. She was with a strawberry farmer from California, a business owner from Alaska, and a group of six others from around the country, making decorations and dressing a Christmas tree. But the tree wasn’t any old tree, it just happened to be an 18-foot Concolor fir in the Blue Room of the White House.

“There were all walks of life; I thought that was really neat,” Barrett said of the experience.

Volunteers from 34 states and the District of Columbia helped decorate the White House for the holidays, including 18 people from military families. Each year the sitting first lady decides a theme for the Blue Room and the White House’s official Christmas tree; this year’s theme by First Lady Michelle Obama is “America the Brave.” Ornaments were made by children from military bases around the world. Ornaments included many thank-you cards from children to U.S. military members, many of the cards hang on the tree, Barrett said.

The official tree honors the courageous service of the troops, veterans and military families who all serve our nation every single day, reads a statement on Whitehouse.gov. The tree came from Crystal Springs Tree Farm in Leighton, Pa. Along with the children’s decorations, the White House also engaged in a partnership with the Smithsonian that challenged students from around the country to create an ornament using a 3-D printer. While no Berthoud students participated in that program, more than 300 ornaments were submitted and ultimately 20 were selected to adorn the tree.

This past summer Barrett applied to be a volunteer decorator at the White House, and surprisingly, she was accepted.

“I love the holidays and love the United States,” said the self-professed history nerd. “I just really love Washington, D.C. for what it symbolizes and for its general history, being the seat of our democracy.”

Barrett enjoys the holidays and being crafty, too, so she was a perfect fit for the opportunity. 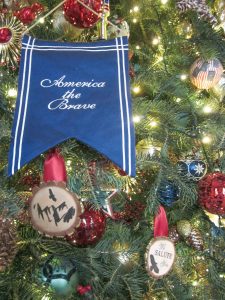 An ornament displays the Christmas tree’s theme, “America the Brave,”
honoring all the men and women who have served in the U.S. military.

“I think it takes a certain type of person,” she said.

She arrived on Thanksgiving and spent the day familiarizing herself with the other volunteers from around the nation. Volunteers then spent a couple of days simply sorting out thousands of decorations.

“There was a lot to sort through,” Barrett said.

After sorting and making new ornaments and decorations to adorn the tree, it was on to the White House to decorate.

“We worked for three days in the White House,” Barrett said.

Barrett, luckily, was assigned to be part of the group decorating the famous Blue Room, which has housed the White House’s official Christmas tree since 1889, according to Whitehouse.gov. It was an honor for Barrett.

“Any room would have been wonderful,” she said. “But it was pretty neat to decorate the Blue Room.”

With around 60 boxes of ornaments and decorations, Barrett and her group had their work cut out for them.

“We had the most boxes of any room,” she said. “There was plenty of work for eight people.”

The Blue Room had a military theme this year, and one of the last decorations placed on the tree were blue velvet flags that had lyrics to the National Anthem printed on them. It was a moment of pause for Barrett.

“The blue velvet contrasted with everything that was sparkly around it in a beautiful way,” she said. 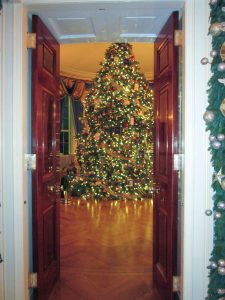 The offi cial White House Christmas tree pictured through the doors to
the Blue Room, where a tree has been on display each holiday since 1909.

Honoring the nation’s troops was an important aspect for Barrett.

“When we put the flags on the tree, that was one of those moments when we could see how this was coming together,” she said. “That was a big moment.”

The Blue Room was just one aspect of the White House’s holiday decorations. According to the website, whitehouse.gov, this year’s holiday tour is estimated to see more than 65,000 visitors throughout the month of December. The holiday decorations include 26 trees and even a gingerbread house complete with a skating rink.

“The East Wing includes a tree adorned with gold star ornaments, honoring the heroes who have made the ultimate sacrifice for our country,” reads a statement on the White House’s website.

“I’m glad that it came across that that was the ultimate purpose of the tree, she said.

The decorating was coordinated by an outside group, according to Barrett, which led the overall decoration plan. However, Barrett said the actual decorating was left in large part up to the volunteers. And that was special.

“Everybody there had some creative control,” she said. “Every volunteer can say that they chose to put that decoration there, so that was wonderful.”

After the decorating was complete, the volunteers spent the last evening at the White House enjoying a reception for their effort, in which First Lady Michelle Obama made a brief appearance.

“It was like a really nice Christmas party,” Barrett said. 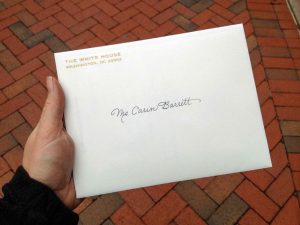 Barrett holds the official invitation to the volunteers’ reception at the White House after a few days of decorating. “I was so excited I didn’t really want to open it and damage the envelope,” Barrett said.

Working in the Blue Room, Barrett often paused for a moment caught herself looking through the window out at the White House’s South Lawn, and instantly being swept with the historical significance of where she was standing.

“You’d be working and turn around and look out the window to the South Lawn,” she said, “and you’re reminded over and over where you are at.”

Christmas at the White House