New bench at BHS remembers one tragedy , hopes to avoid another

AJ Black was the definition of a traditional teenager who possessed several of the textbook traits of someone that age while also being entirely unique with his own distinct qualities that family members, friends, teachers and coaches fondly recollect about the young man. He was a good student, state-qualifying wrestler, and held a part-time job at a pizzeria. 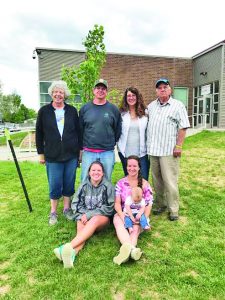 AJ Black’s family in front of the tree that was planted in his honor at the high school. From left to right (top row) Alberta Black, Alan and Shay Black, Neal Black (bottom row) sisters Alisha and Rachel Ellis along with granddaughter Jaymie Ellis.

Consequently, AJ Black demonstrated little to none of the “warning signs” that some individuals falsely attribute to factors leading to a suicide when AJ took his own life at his home in nearby Johnstown on April 1, 2016.

It’s been well over a year now, yet the impact of it remains surreal. It is something Shay Black, AJ’s mother, mulls over while sitting on a bench that was recently donated to the east side of Berthoud High School (BHS), along with a tree, in honor of her son.

Shay and her husband Alan have been active since AJ’s tragic passing, both remembering their beloved son as well as raising awareness for mental health. The couple launched the AJ Black Foundation, and Shay has participated in multiple speaking engagements regarding the issue.

The maroon bench was installed shortly before graduation in May, and while it is clear it honors AJ and the foundation established in his name, Shay explained her family “wanted it to be not so much a memorial bench, but more of a gift from AJ’s class.”

The metal bench was constructed by C&T Custom Fabrication, located just outside city limits, by Cameron Matthie who has been a friend of the family for quite some time. The bench features cutouts of the Spartan logo, pineapples (AJ’s favorite fruit), nods to the wrestling team and class of 2017, along with “Text Help to 741741,” a direct hotline for anyone struggling, particularly considering taking their own life.

The fruitless pear tree that was planted outside the east entrance of the school blooms right around the time of year AJ died, according to Shay, and says will help “to remind everybody that hope is still alive.” It was donated by Bonnie Greco Verhow, another good friend of the family.

“It’s pretty amazing the people that have just been there for us,” Shay added. “I think out of something really horrible we’ve realized how blessed we are because this community is amazing, and we don’t even live in this community, and they’re still part of our family it feels like.”

While Shay admitted she does observe progress being made inside the Thompson School District and other communities regarding mental health awareness and prevention, it still remains a delicate, complicated subject to address. 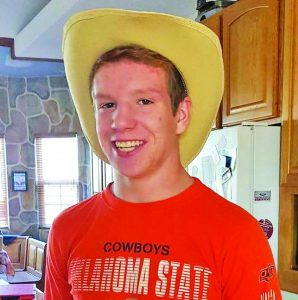 “Looking back, we still don’t know why AJ took his life,” Shay said. “He didn’t leave a note. He didn’t leave any clues. That’s what I really want parents to understand is it can happen to anyone. AJ was a normal kid. He hadn’t had any major problems. He was a good student. He was a decent athlete. He seemed really happy. My husband and I have been married a long time – we have a pretty average but a good life – something like suicide never entered my scope.”

Even if teenagers have a tendency to withdraw from their parents (and adult figures in general), especially when discussing emotional issues, it is exactly the type of conversations Shay believes parents, teachers, coaches and pastors must pursue with the youth. AJ suffered a couple of severe concussions during his wrestling career and, while the family took all the necessary protocol during rehabilitation, Shay says all the doctors and experts were quick to acknowledge the physical consequences, yet rarely the mental repercussions. It seems to fall in line with the somewhat taboo nature of discussing mental illness and the unfortunate misconception that if “adults talk to kids about suicide then it will happen.”

Shay remarked, “I know that’s how our schools, our teachers, coaches, staff have been educated in the past. That’s just not the case. My hope is that we can educate parents and they can look at my husband and me, and think ‘It happened to them. It can happen to us.’ We’re just a normal family too. And maybe they’ll be a little more aware and educated on what to look for and what to ask.”

It is not the will and desire for adults to speak with adolescents regarding sensitive issues, Shay argues, but rather a lack of education related to what exactly to say or do. It is why Shay heavily pushes mental health first aid classes offered through the Thompson School District yet not required by faculty to participate in.

“It’s disappointing to me they don’t require that of their staff. It’s free. If you’re working with kids why wouldn’t you do it? I was a soccer coach at Berthoud High for a couple of years. I had to go through a lot of things through CHSAA to coach those kids, and none of it was mental-health training.”

The mental health first aid training acts as a metaphorical band aid for everyday people to provide the skills and tools to help victims stay safe until they are in the hands of professionals; something that appears a necessity in any community, let alone Larimer County, which has one of the highest suicide rates in the nation.*

It is an awful statistic that Shay says “should put a scare in people,” and the AJ Black Foundation is what she and her husband envision can serve as the bridge connecting professional resources to those struggling, or parents of those struggling, hopefully reducing the high number of suicides in the area. Last school year the foundation had a couple of fundraisers through BHS and plan to launch several more in the near future. Until then personal donations can be made at ajblackfoundation.org.

Shay has also created care kits that are dropped off to families of victims immediately after a tragedy. The kits include items Shay found helpful after her own loss, including unscented jar candles, hot teas, aromatherapy oils and tissues.

“When AJ died we realized, what does a single mom do when something like this happens? Or a family new to town that doesn’t have a church family, or a school family, or anything like that? So that’s why we wanted to do the care kits to try and help them in some way. Let them know that they’re not alone.”

Shay would like to continue to see more progress, more open dialogue within the community, though new classes like the J.O.S.H. program is a major step in the right direction. Additionally, she is optimistic the old-fashioned, narrow-minded approach of “sucking it up” and “toughing it out” regarding anything with mental health will be replaced with a “more compassionate and sensitive” mentality:

“I think that as a generation of parents you have to learn to adapt. That’s where, as parents, we have to change; we have to change the language and how we talk to our kids. You don’t want to baby them, but yet you want them to understand that it’s okay you are having a rough time right now, but we’ll get you help. I look back and I wish I would have known then what I know now. I would have encouraged all of my kids to talk about it more instead of ‘Oh, they’re just being a teenager.’ It’s not always just being a teenager.”

She continued, “You have to talk about it. We need to empower people. It’s no different from your physical health. If I walked outside and tripped and broke my leg I would go to the doctor. Everybody would rush over to me, pick me up, take me to the doctor, I would probably get some flowers and some meals delivered. But if I had a broken brain, my mental health was broken – everybody seems to shun that off and they shouldn’t. It should be the same thing. We should all be rushing to help that person and lift them back up and take them to get professional help.”

Along with parents, Shay seeks to be “really blunt with students” about the pain that is caused when a loved one takes his or her life. She hopes that by being an example of the impact it causes, the youth will understand the finality and severity of suicide.

“I also want kids to understand that there is nothing I would not have done for my son. There is nothing,” she added. “And my husband has said it over and over again: There’s nothing that I wouldn’t have fixed for him, but he did the one thing I cannot fix. So I want kids to really understand that. It is truly the one thing that parents can’t fix. We can fix anything else. It might take some time. It might be a little painful. It might take some money, but you know what? We can fix it.”

Shay ultimately considers mental health disorders no different from heart disease or cancer. They’re all diseases. They all kill. Suicide may be the word used to describe the way in which AJ left this earth, yet it’s not why he left this earth. The solution to prevent similar catastrophes in the future is all about erasing the stigma associated with it.

“Suicide doesn’t discriminate – it’s all across the board,” Shay concluded. “What we’re seeing, the kids that are dying are a lot like my son. They’re talented, they’re funny. They have a great personality. There is no reason, but yet we are losing them. I tell people that his death will never, ever be worth it to me and my family, but if we can save one kid –just one – then AJ’s death will be worth it to that family. Since I can’t bring my son back – that’s the best I can do.”