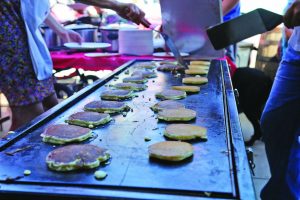 Pancakes line up the griddle ready for serving during the 2016 Flap Jack Day event, an annual tradition hosted by City Star Brewing in downtown Berthoud.

Whitney Way of Berthoud figured a craft brewery is the perfect place to serve flapjacks and bring a touch of history to Labor Day.

Way, who co-owns City Star Brewing with her husband John, got the idea for Flap Jack Day, now in its third year, from a black-and-white photo of a parade float that hangs in the hallway of the brewery. The photo, a reprint from the Berthoud Historical Society, depicts Flap Jack Queen contestants seeking penny votes during the Labor Day event held in Loveland from 1948 to 1958.

“We took a historical event and made it our own,” Way said. “It’s kind of a family friendly community event that is a throwback to the ‘50s and a unique spectacle in support of the local historical society.”

Berthoud’s first historical Flap Jack Day drew 1,000 people to one of the town’s parks to eat 5,000 free pancakes in an event hosted by the local Lions Club and the chamber of commerce. But, after a decade, the event had grown too large, and the hosts, who wanted to bring neighbors together during the holiday, could no longer fund it.

While it lasted, the event featured the crowning of the Flap Jack Queen through a popularity contest of dropping pennies into jars at local businesses, a swimming and diving contest, a baton twirling competition, a tractor driving challenge and a pet and doll parade.

City Star modernized the event, while still continuing the tradition of free pancakes that will be served in front of the brewery at 321 Mountain Ave., from 11 a.m. to 6 p.m. on Sept. 4. The Ways decided to make the historical society the beneficiary of the event based on the photo and their interest in history.

“It’s the best way to celebrate Labor Day that I know of,” John said. “We thought it would be great to revive it and bring it back to life, and for what better cause than the historical society?”

The event also fits right in with the brewery’s historic building, said Ian Phillips, emcee of the event and a Lyons resident.

“When you enter City Star, it’s like taking a step back in time,” Phillips said. “They brought it back to the way it was. … There’s all the old photos from the historical society on the wall.”

In the event’s first year, staff at the brewery, with the help of volunteers, served 1,000 pancakes, and 1,500 the next year — this year they are prepared to serve 2,000 pancakes.

The pancakes are made from a scratch recipe provided by Diane Levy, events coordinator of the historical society. Levy, with the help of volunteers, will mix up the pancakes, which are then cooked on metal sheets on top of grills in front of the brewery.

“We refer to her as the ‘batter queen,’” Way said about Levy, adding the volunteers at the grill are “the flippers.”

“The whole community comes together to help us give away a bunch of food,” Way said.

Whitney and John added beer to their serving of pancakes and each year develop different breakfast-themed beers. This year they will serve a flight of five beers in the tap room in four-ounce sample glasses, including French toast stout, mochaccino brown, cherry saison, apple strudel lager, and pineapple India pale ale, or IPA.

“They’re a lot of fun and made just for the event,” Way said. “It’s really the ingredients that are making each of these beers unique … featuring those flavors reminiscent of that type of breakfast food.”

In another feature of the event, City Star retained the Flap Jack Queen contest, but with women speed eating five pancakes wearing their Sunday best in 1940s and 1950s attire. The contest is scheduled at 3 p.m. on the new stage in the beer garden, an addition to the brewery scheduled to open that day.

Last year a group of men joined in for a drag-queen version of the contest, dressing up in women’s clothing. The contestants pay $10 to participate, and the money that is raised goes to the historical society. The winner receives a tiara and donated gifts.

“We love hosting community events, especially unique events … where we can have fun and bring the community together,” Way said.

To continue the historical aspects of the event City Star encourages anyone with a classic or vintage car to park along Mountain Avenue for a car show and to dress up in old-fashioned attire.

Last year when the car show was added there were 20 to 30 cars, Way said.

“It all ties into this community throwback fabulous ‘50s vibe.”

The Berthoud Historical Society will provide a booth with information about Flap Jack Day and sell $1 commemorative pins. The event raised $1,000 the first year for the historical society and $1,600 the second year.

“To have a local business step up and hold a fundraiser for us not only helps us operate but helps us celebrate our local heritage,” said Mark French, president of the historical society, explaining the nonprofit does not receive support from the Town of Berthoud and raises all of its money for operations. “It’s a special day for us.”

For details, visit CityStarBrewering.com/flap-jack-day and to register for the contest, go to citystarbrewing/flap-jack-queen-contest/.