Vincent Mosley of the LCSO to serve as BHS’s SRO 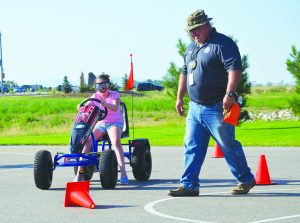 Mosley began July 1 as the new school resource officer, or SRO, at Berthoud High School (BHS) and Ivy Stockwell Elementary School, a position previously held by Ray Meyer. He took the position after being mentored as a youth and wanted to share that experience with other youth.

“I know it sounds quirky, but for me it was a sense of being able to give back to the community, to give back to others what was given to me,” said Mosley, a deputy sheriff assistant, and Fort Collins resident. “I want to mentor children and be a positive role model for them.”

As an SRO, Mosley is involved in the security of the school — his main duty is with BHS, but he also makes routine visits to Ivy Stockwell, where he teaches classes on safety and other topics.

“Unfortunately, in society today we live in a violent world, and I think it’s important our kids are kept safe and allowed to get the education they deserve,” Mosley said. “I take it very seriously. Parents entrust the safety of their children to me.”

At BHS Mosley helps handle any threat assessments where staff conducts a review and, if action needs to be taken, comes up with a plan for the school’s safety. He helps address issues with students needing safety plans to help them be successful and to protect other students at the school. And he watches for any type of drugs, nicotine or illegal items that come onto the school campus.

“Our main purpose is to provide safety for the school and the children,” Mosley said.

Mosley walks the halls and, during the lunch hour, drives around the school and immediate area checking for activities such as smoking, vaping and hot rodding. He also watches the school’s security cameras, visits classrooms, provides programs on topics such as safety, drug and alcohol education, and social media, and attends staff meetings.

“I’m trying to keep an eye on the safety of the school,” Mosley said. “We make sure kids are staying in class, they’re getting to their classes, and we make sure they don’t leave and don’t come back.”

Sgt. Jim Anderson, Berthoud police chief, said school staff praised Mosley during the school visits he made as a deputy, for the way he talked with students and staff members.

“He’s got a huge heart. He’s very empathetic to the people he deals with,” Anderson said. “He listens to the whole situation before he makes any conclusions as to the best way to handle things. … When he’s listening to a problem somebody has he listens through it completely before he makes a decision or offers some advice. … He enjoys being with the kids.”

In the morning Mosley likes to greet the students, saying things like, “You have to smile. This is a no-frown zone.”

“I enjoy working with the staff. I enjoy working with the kids,” Mosley said. “I want to establish that relationship where kids are OK talking with a police officer at the school, so when they see us on the streets, they’re not afraid to talk to a police officer. I want to help better the relationship between kids and law enforcement, as well as their parents.”

Mosley, who came from a broken home in Houston, Texas, built relationships with a few of the fathers of his friends and received mentoring from them. He saw them as positive role models who kept him out of trouble, held him accountable for his actions, and made sure he did his studies.

Mosley, after graduating from high school in 1991, played football on a scholarship for Midwestern State University in Wichita Falls, Texas, for two years until he was injured. He decided to enter the military to earn money for college. He served in the U.S. Army from 1993 to 1999 on active duty and in the reserves from 1999 to 2012, where he was activated several times, resulting in 12 years of active duty. He served in Iraq, Kuwait and Saudi Arabia and was stationed in Europe, Korea, and the states. He retired as a staff sergeant.

“It taught me a lot of discipline, being a leader and working with others,” Mosley said. “One of the greatest things it taught me is an appreciation of life itself … and the freedoms we have. … Through everything I went through, it’s what made me who I am.”

Mosley returned to school and continued his studies in criminal justice administration, earning a bachelor’s degree in 2008 from University of Phoenix.

“Berthoud has been great for me,” Mosley said. “It’s a small community. People are very friendly here. There’s a sense of family here.”

For the past six years Mosley has worked as an active member of the sheriff’s office’s Special Weapons and Tactics, or SWAT, team. He also helps with the Fort Collins Police Services’ youth police academy and is an instructor for a regional crisis intervention program that combines several local agencies.

“I want to be able to give my all to what I’m doing,” Mosley said. “It’s in my nature, growing up in some rougher areas and seeing that it’s a way to pay it forward. It’s a way to give the citizens and people in this community the ability to enjoy life and be safe doing it.”

Mosley said he’s not in law enforcement for metals or to be seen as a hero.

“I’m in it because it’s what I want to do. It’s what I love, what I have passion for,” Mosley said. “I’ve been told many times, thank you for what you do. It means a lot. It’s very heartfelt. That’s what makes it worthwhile.”

Mosley’s wife is Marla Cazier-Mosley, and they have two children.