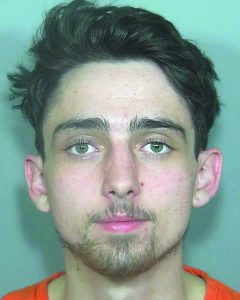 A former Berthoud High School (BHS) student, Skylar Hill, has been charged with felony criminal mischief for driving a stolen vehicle to Berthoud and driving through two doors at the school. Hill lived in Milliken and attended BHS from 2011 to 2013.

On Feb. 14, 2017, at approximately 5:41 a.m., a Larimer County Sheriff’s Office (LCSO) Berthoud Squad deputy received a telephone call from a BHS staff member reporting significant damage to the school building. A deputy responded and located damage to a foyer/walkway on the west side of the school. It appeared a vehicle had driven into the building through a set of glass doors and exited through a second set of glass doors.

No suspect vehicles were located on school property or in the immediate area, and deputies searched the building for potential suspects, but none were found. Berthoud Fire Department was also called to the scene to check the structural integrity of the building. The school was not occupied at the time the damage occurred. The damage to the building was estimated at more than $35,000.

Through the course of the investigation, Hill (12/02/1997) currently of Frederick, Colo., was identified as a suspect. In late March, LCSO investigators learned Hill was being held in the Weld County Jail on unrelated charges. Investigators interviewed Hill at the jail and established probable cause to pursue charges against Hill for driving a vehicle through the BHS building.

LCSO investigators also worked with the Boulder Police Department and determined Hill had stolen the vehicle in the City of Boulder. Boulder PD has several pending felony charges against Hill involving the stolen vehicle, and it was decided the Boulder County District Attorney’s Office would seek the additional charge of felony criminal mischief against Hill for the damage he caused to BHS.

Hill is still in custody at the Weld County Jail. The charges are merely an accusation and the defendant is presumed innocent until, and unless, proven guilty.