The formula to bring home a state championship is extraordinarily complex, like the Standard Model Lagrangian complex. The team needs not only the requisite ability but also the right mix of desire, camaraderie and steadfast leadership to create the winning concoction. 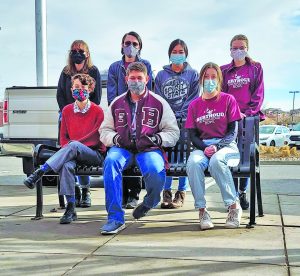 “It’s fantastic, we’ve been so close so many times, so to finally get it just really fantastic,” said Sundheim. “It’s the culmination of a lot of hours that has paid off, and it’s been a lot of fun throughout it,” added Paradise.

The competition is grueling and is far more intricate than a Jeopardy! like trivia contest. 10 rounds of questions, two completed in written form and eight done orally, on topics ranging from literature to physics are presented in the state finals. One bad round, even one missed question, can doom a team’s a chances.

“Oral rounds involve three teams per room and uses an electronic lock-out device system. A reader presents the questions, and a team member may buzz in as soon as he or she chooses. If they miss a question, nothing is deducted, but the other teams then may try to answer the question based on who buzzed in first,” according to the Colorado Knowledge Bowl, which began in the 1970s.

Berthoud’s sextet of savants, after placing second in back-to-back years, were convinced they would win the title last spring before the COVID-19 pandemic spoiled their chance to compete. This year, they were not about to let the opportunity slip through their grasp.

That motivation, as the team explained, provided tremendous fuel to their competitive fire.

“Long time coming, we’ve been so close every year and we felt so strong that we would have gotten it last year but COVID derailed us and we came back even stronger this year,” Schanker said. “I feel that trying to bring a trophy back to the school has pushed us but I think what has pushed us even more is being so close so many times in recent history that through that motivation of we don’t want to be that close again, that has been the best motivation over the last two years, we pushed ourselves so this year is the year.”

Knowing the long history of success that the Berthoud team has enjoyed, in addition to having a background as Knowledge Bowl competitor during his high school years, Coach Fabiano was ready to jump in with both feet.

“One thing that motivated me a lot was how much they wanted to win after coming close all those times,” Fabiano said. “I’m a super competitive person and where we got second place twice and now, we want to win, I want to be a part of that, I want to do whatever I can!”

As team captain, Cranwell, in addition to working to answer the questions and solve problems, was tasked with assuring the team ran smoothly and cohesively as a unit; he had to make sure the whole was greater than the sum of the parts.

“I’ve spent all of this year learning all of the different strengths and weaknesses of everyone on the team, a big part of Knowledge Bowl is just being able to tell each other how confident you are in a question,” Cranwell said. “If Eliana says she probably has the answer, she got it 100%, so I’ve learned who knows what different things.”

The kinship the team formed was not only instrumental in their success but also provided, as Schanker explained, a social outlet that helped build enduring relationships. “The precedent of that common ground of every one, being able to become better friends with fellow classmates that I would otherwise have just had a passing relationship with, that’s been one of the highlights, it’s that community that forms,” he said.

Fabiano built on Schanker’s point, remarking, “One of the things I know for (the team) is you guys will always connect this with each other, and that’s what great about when you win something like this, you’re not going to ever think about this without thinking about each other or thinking about your school”

While Berthoud’s state championship will be forever remembered, even after this group takes the next steps in their lives, the tradition of aiming for the pinnacle of success will continue with future classes. “I think what we’ve done this year incentivizes us to carry on and uphold and carry on this legacy. We will want to make sure we find people who are interested, we don’t want to let the ball drop with us, just trying to make sure to get younger people involved,” Paradise said.

“Continuing the tradition of doing well as a team is easy when we can pass it along, now it’s our turn as seniors to find some younger classmates hand the banner off to,” Sundheim said. “I’ve already started training my little brother.”