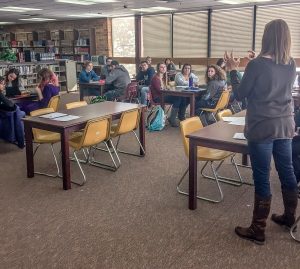 Berthoud High School students generously participate in Give Next meeting during a recent lunch break at BHS. The group’s intent is to raise money that will help those in need of housing.
Courtesy photo

On a daily basis in the United States, 500,000 or more individuals will be without food and/or shelter for the night, 34 percent of which the United States Department of Housing and Urban Development (HUD) reports involves those age 24 years or younger. Needless to say, in a rather affluent community, such as Berthoud, these epidemics sometimes get dismissed, yet for a group of 25 students at Berthoud High School (BHS) combating youth homelessness is of the utmost importance.

While most students rush off-campus during a short 30-minute window for lunch, students of Give Next – the philanthropy program that is driving this year’s effort to reduce youth homelessness – meanwhile gather at the library every Wednesday in a student-driven program headed by 16-year BHS veteran Carin Barrett.

It is the school’s third year participating in Give Next, with previous issues dealing with self-harm and suicide, closely associated with the Bohemian Foundation and community advisor/benefactor Serimus Foundation. Only 10 high schools participate in Give Next – four of which are in Thompson R2-J – with Berthoud being the longest participating program.

While the program transforms into a credited course next year – currently BHS students thoughtfully participate in a year-long cycle that begins with students attending a field trip in the fall in order to listen to crucial presentations before meeting with non-profits and attending other sessions regarding the issue within the Larimer County community. Then the student body is polled before the committee settles on a specific issue. This year the issue is “homelessness prevention in families and improving the lives of homeless youth,” according to Barrett.

Berthoud High School’s Give Next group is trying to raise $1,000 by the end of March to help the area’s homeless population.
Courtesy photo

The student body has already done work with Homeless Gear, a Fort Collins-based organization where several students acknowledge seeing all the behind-the-scenes work of a non-profit has been very humbling.

Seniors Samantha Greer and Jack Meira have found the number of youth homeless just within the Thompson School district “eye-opening” and “startling.” Personally, Meira has “known several people on the brink of homelessness” and, as a caring friend and member of the community, hopes to never see anyone go without food or shelter, even for a night.

“By participating in this project it has shown me that many people, especially youth, are homeless in our community and, by helping, it gives me a sense of pride that I’m helping end it,” Goreski said. “Also, it’s shown me how many organizations are out there making a difference through my community.”

All the students of the group collectively agree spreading awareness about homelessness is the first step toward change. Additionally, Barrett noted there is big emphasis on finding shelter first and foremost.

“We’ve learned that making sure youth have access to programs and shelters that are specifically directed toward them is important, so any habits they may have learned that can be sabotaging them can be addressed with their needs in mind,” she added.

After settling on youth homelessness as this year’s issue, the committee researched non-profits that fulfilled their mission and sent out invitations to be considered. They are currently reviewing grants and will be awarding funds to the organization or organizations that fit this year’s mission statement: $5,000 is awarded thanks to the Serimus foundation, with an additional $400 raised by the school. By the time grants are awarded in April, students hope to have raised $1,000.

In addition to the grant application and rewarding process, Barrett says Give Next teaches students that “philanthropy is about giving your time, talent and treasure to a problem, rather than just treasure.”

“I think teenagers need to be encouraged to see themselves as people who both should look around their surroundings for ways they can improve them, and then also as people who can make a difference,” Barrett said. “There are so many possible outlets for teens when it comes to community involvement and interaction, ranging from basic advocacy to extensive volunteering, and I think we as a school and larger community need to make that almost an expectation, that teens would look for these opportunities and understand the profound impact they can have.”

Greer summarized, “young people especially need a good, solid start to life in order to be in a stable and successful place for the rest of their lives.”

Anyone can donate to BHS’ page on the Community Foundation of Northern Colorado platform, found here: https://www.coloradogives.org/GiveNextBHS.