Former Berthoud Surveyor freelancer Kathleen Donnelly’s romantic suspense “Chasing Justice” was picked up by one of the “Big 5” publishing houses.

The Berthoud resident’s 368-page novel is expected to be published in paperback and ebook formats in June 2022 by Carina Press, an imprint of Harper Collins. 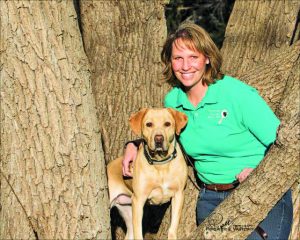 Photo by Piper Worcester of Piper’s Pix – Berthoud author Kathleen Donnelly is pictured with one of her canine dogs, Willow, in November 2017. She is the author of the forthcoming romantic suspense, “Chasing Justice,” about a K-9 handler.

“When I finished the manuscript last year, I queried about 50 different agencies, and I got a lot of feedback, but no one took it,” Donnelly said, adding that in 2020, she found a literary agent who wanted to represent her.

Donnelly took six years to write her novel, but she’d start and stop based on what was going on in her life. The story she tells is based on her experiences as a canine handler and co-owner of Sherlock Homes Detection Canines, a private canine company headquartered in Berthoud and Goodyear, Ariz.

The story focuses on Maya Thompson, a veteran military K-9 handler who’d served in Afghanistan, but due to handler error, her dog was killed. When she returns to the states, Maya takes a law enforcement position with the U.S. Forest Service and reluctantly agrees to work her best friend’s K-9 to solve his murder.

“Very quickly, Maya and a heroic K-9, Juniper, are in the type of trouble that they were both born to handle. If only Maya could handle matters of the heart with the same command,” said Donnelly’s agent, Ella Marie Shupe of the Belcastro Agency. “Kathleen’s descriptions of the Colorado landscape woven together with Maya’s experience and Juniper’s tracking abilities had me hooked. I started rooting for this team, and I knew readers would, too.”

Donnelly came up with her story idea in 2014 while driving through the Big Thompson Canyon, asking what if there was a handler error involving a bomb that cost the dog’s life and how the handler could heal from that. Maya came to her as a character, already embodying her first name—and she added Thompson because of the local inspiration and tribute to Colorado. She set her novel in the fictional town of Pine Cone Junction, loosely based on Gunnison and other small mountain towns, and Pino Grande National Forest after the Roosevelt and Arapahoe national forests.

Donnelly hired a freelance developmental editor in 2017, but then decided to do a complete rewrite in 2020 to implement her editor’s suggestions. She likes to get up at 4:30 or 5 a.m., drink some coffee and write for an hour or until her dogs need to go out. She also fits in writing any time she can during the day.

“One thing I learned is if you have 10 minutes, you can knock out a bunch of words,” Donnelly said. “I had to make time for it and have it become an important piece of the day.”

Donnelly juggles writing with being a narcotics detection canine handler—she joined Sherlock Holmes in 2005 and became a partner in 2010, she said. Sherlock Holmes primarily works in schools in Northern Colorado and currently has 21 schools on its list.

“Our goal is to be proactive and deter the presence of drugs, alcohol and gunpowder,” Donnelly said. “The kids call them the sniffer dogs; I kind of like that.”

Donnelly has three “sniffer dogs,” two black labs and a yellow lab, plus a 14-year-old retired Russell terrier who insists on going out on all jobs. Canine dogs typically do not make great pets, since they are high-energy, retrieving dogs needing constant stimulation, she said, adding that her dogs also are friendly, loving and “very sweet.”

“You have to keep them busy. Once they have a job, it gets a lot better,” Donnelly said. “What’s fun is when I leave for work, they all come with me. … It’s hard to have a bad day when your coworkers are that excited to go to work.”

Before becoming a handler, Donnelly earned a bachelor’s degree in technical journalism from Colorado State University in 2000. Once out of school and not knowing what she wanted to do, she started offering private horseback riding lessons and training dressage horses.

“I enjoyed it, but I knew that wasn’t what I was meant to keep doing,” Donnelly said.

Donnelly’s business partner approached her about canine handling, knowing she understood animal training and could read the body language of animals. Donnelly thought it “sounded like fun,” she said.

Donnelly also worked in journalism as a freelance writer, including for the Berthoud Surveyor from 2011 to 2014, she said. At the time, she was living in Johnstown and moved to Berthoud in 2016. She doesn’t do any more freelance writing, instead focusing on writing fiction, she said.

She’s working on the second book in what will become a series, which she said will need to follow a quicker timeline than her first book. She also has ideas for a few standalone novels.

“For me it was fun. I enjoyed writing it,” Donnelly said. “I hope when people read it, it’s fun and entertaining.”

“Chasing Justice” can be purchased in advance at www.harlequin.com and at www.amazon.com. Donnelly’s website is www.kathleendonnelly.net.