On Saturday, Sept, 29, Steve Frye, Turner Middle School (TMS) teacher/coach and Berthoud High School (BHS) coach, entered Loveland High School (LHS) – his alma mater – having graduated there in 1998. He was at the school to be inducted into the LHS Hall of Fame. The normally exuberant and enthusiastic Frye said he was humbled and honored to be part of the ceremony.

This is the fourth year for the event that takes place during LHS’ homecoming weekend festivities. Honorees are presented at halftime of the weekend’s football game and at a ceremony and reception the next day at the school. 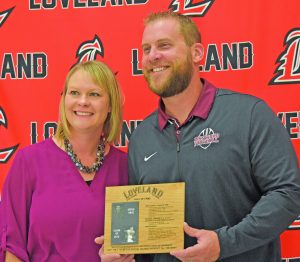 Photo by Bob McDonnell – Christine Frye stands with her husband Steve after his LHS Hall of Fame induction.

Frye and his family made it to the Saturday event but did not attend Friday night. Being an assistant coach at BHS, Frye put his team and athletes ahead of himself and was on the sidelines at the BHS game instead. Always the coach and BHS and TMS advocate, Frye accepted his Hall of Fame plaque wearing a gray and maroon shirt with a Spartan logo on it.

Unlike some Halls of Fame, LHS chose to make theirs span beyond sports. The committee looks at all aspects and activities in which students participate. The group also focuses on people who were not just outstanding in high school but went on to accomplish things in their life.

Past teams and individuals in the Hall of Fame include artists, scientists, coaches, a screenwriter, an actress, a Heisman Trophy runner-up, and those who did well in business, medicine, and education. Also, the selection committee has recognized all past state-championship teams from LHS. This not only includes sports but also band, cheerleading and drama. All state-championship sports teams have been noted in past years. The 2018 team honorees were the 2000 National Science Bowl team, 2001 National Ocean Science Bowl team, 2012 National Ocean Science Bowl team, 2013-2014 JROTC Raider Team One, 2009 Crimson Regiment Marching Band and the 2015 Unified Basketball team.

John Poovey, former LHS football teacher and coach, and himself an LHS Hall of Fame inductee last year introduced Frye to the auditorium full of friends and families of those being recognized.

Poovey noted Frye played football all four years he attended the school. The coach listed some of Frye’s many accomplishments as a high school athlete, including All-Conference honors in 1996 and 1997, being named to the All-State team in 1999, and having served as captain of the football squad. Frye also made the All-Academic first team.

Frye holds records for most quarterback sacks in a season (20), career sacks (35) and tackles for a loss (52). Poovey pointed out all this was done while Loveland played football in the 5A classification.

Frye attended the University of Idaho on a full scholarship. He transferred to University of Northern Colorado (UNC), and played football there. He made the 2002 Academic All-Conferenced team. After graduation, Frye was UNC’s defensive line coach in 2003 and 2004.

At TMS Frye’s involvement has included teaching physical education, coaching, athletic director, and dean of students. He started the Muscle Lab, an early-morning fitness routine which is now a class offered at TMS.

Frye, his wife and two of his three children mingled with the crowd at the reception in the school cafeteria. At this time, and before the event, Frye shook hands with and talked to athletes, coaches and teammates he knew from his time at LHS.