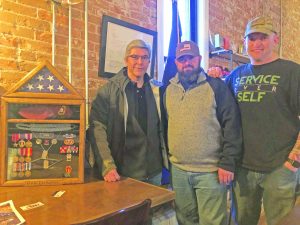 Bob Conde, Kraig Patriquin and Ryan Armagost stand inside Hale & Bradford Distillery beside a shadow box commemorating Bob’s son Spc. Gabriel Conde who was killed last year while serving in Afghanistan. Armagost is working with other local veterans to open a Veterans of Foreign Wars (VFW) Post that will be named in honor of Gabe Conde. The group currently has 33 VFW members committed out of the 35-minimum required for the Berthoud post charter. The event was in conjunction with Hale & Bradford’s release of a special edition veteran bottle of bourbon, a portion of the sales of which help support Berthoud veterans. Representatives from the VFW, American Legion, Healing Warriors Program, Rescues Rescuing Veterans, and many community members were also in attendance. The event raised approximately $3,500 in donations for the Berthoud Veterans’ Club.