A trip to understand, and to forgive 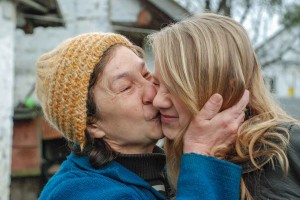 Samantha Stoesz receives a kiss from her biological mother, Lyudmilla Seleznova, while visiting Ukraine in April.

Samantha Stoesz didn’t know what to expect when she traveled to Ukraine in April to see her biological parents.

“I basically don’t know them, since I was so little when I was taken away,” said the 18-year-old Samantha, in her petiteUkrainian accent.

Prior to April Samantha hadn’t seen her biological parents, Lyudmilla and Sergey Seleznova, since she was 11 and living in a Ukrainian orphanage she called home since the age of six.

“I saw them once before, but that’s when I was already in the orphanage,” Samantha said.

Samantha, formerly Anya, was adopted by Berthoud residents Clarke and Kris Stoesz in 2012 at the age of 15, after spending nearly nine years in an orphanage. When Clarke and Kris adopted their first child from Ukraine in 2003, a 3-year-old girl named Natalie, they understood the possibility that she may one day want to know about, or perhaps even meet, her biological parents. The Stoeszes, who have two additional adopted children from Ukraine, biological siblings Rhya and Luke, have always left the option open for their children to one day visit their biological families still living in their native country. That meeting happened in April for all of them as part of a Ukrainian television show called “Concerns Everyone” on the Inter Channel.

The Stoesz family traveled to Ukraine the third week of April to appear on the show which focused on reuniting adopted orphans with their biological families. The show wanted to understand why the children were given up for adoption and how the children have dealt with the separation.

The Stoeszes have always been comfortable with this idea and agreed that it was a good opportunity for their children. They were contacted by an acquaintance in Ukraine about the opportunity last November. The Stoeszes checked out the show and learned more about the program and its purpose before signing on.

“For us as adoptive parents, [being on the show] was kind of an added part, for us it was really the main goal to reunite everybody with their biological family,” Kris said.

It was difficult for Samantha to see her biological parents, she said; she didn’t know what to expect. Samantha 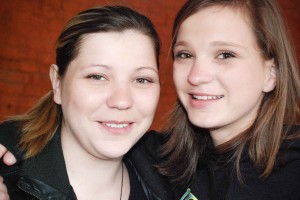 Biological sisters Natalie Stoesz and Nastia Pugacheva pose for a photo during the Stoeszes’ trip to Ukraine in April. The Trip allowed the Stoeszes’ adopted children to meet their biological families.
Photos courtesy of Clarke and Kris Stoesz

was reserved about the meeting, but she admitted that she was happy to see them once she arrived at their home, approximately an hour-and-a-half outside of Kiev, prior to the show. The visit was a surprise to Lyudmilla and Sergey, according to Samantha.

The Stoeszes’ youngest daughter, Natalie Stoesz, 14, being so young at the time of her adoption, remembers very little about her life in Ukraine before coming to America. The trip was different for both Natalie and Samantha because Natalie wasn’t told that she was going to meet her siblings; she was surprised on the television show by her three biological siblings: Nastia, 23, Sasha, 26, and a brother, Oleg, 27.

“I was really shocked that I got to see them, at first I was overwhelmed with a whole bunch of feelings,” Natalie said.

“We did a whole bunch of things, it was pretty fun,” she said. “I got to know her and I figured out that we’re basically just alike. It’s nice to get to know someone from my family and get to know what they are like.”

Ukraine has been an independent country from the former U.S.S.R. since 1991. The current conflict started in November 2013 when then Ukrainian President Viktor Yanukovych decided to pull out of an association deal with the European Union, sparking street protests that eventually led to his downfall, according to BBC News reports from May 2014. As a result, Russia reacted by annexing the Ukrainian region of Crimea, and unrest grew in eastern Ukraine where pro-Russian sentiment is strong. Armed men living in tents still occupied much of the area when the Stoeszes visited.

Kris said there was little apprehension about traveling to Ukraine despite the conflict.

“A lot of people asked us about that,” Kris said, “but we thought it was God’s thing, as far as the timing.”

And, as adoptive parents they knew and understood the importance of finding the children’s biological parents and allowing them to meet.

“Traveling there, we made sure that we didn’t put ourselves in harm’s way,” Kris said.

They did travel to downtown Kiev where large protests destroyed much of the downtown core, Kris said.

“We did go down there because it’s history,” she said.

The conflict continues and was ongoing while the Stoeszes traveled their children’s home country, but it wasn’t severe enough to keep them away, according to Kris.

“It’s really an opportunity of a lifetime to have all the kids together and meeting their families, for the nine days we were there,” Kris said.

Natalie said that she wasn’t worried about the conflict; she was more interested in learning and seeing firsthand what was occurring.

“I just wanted to see what was going on,” she said. 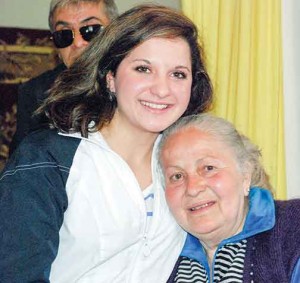 Rhya Stoesz, left, pictured with her biological grandmother in Ukraine in April.

For the Stoeszes’ adopted son and daughter, siblings Luke and Rhya, who likely had the most difficult emotional hurdle to overcome, the trip was about forgiveness. The pair was reunited with their mother and stepfather, Nadezhda and Peter Frolovs, and half-siblings, Daniel, Lilya and Natasha, as well. They also met their biological father, Leonid Gorvat, and half-brother, Yurok.

They were able to travel to the home where they spent part of their childhood. Their reunion was more difficult because of their tumultuous upbringing, Kris said. According to the show’s transcript, Luke and Rhya’s mother struggled to take care of them; she had issues with alcohol and moved frequently. Luke, who now lives with another family in Georgia and goes by his birth name, Sasha, told the show’s host that most of his memories of his mother were painful. But, they still wanted to talk with her again, to tell her that they forgive her, despite the hardships they’ve endured.

“I don’t know; I never really had anger against them,” Luke said, according to the show’s transcript. “I felt like whatever they did was meant to be because, eventually, I ended up in a better place.”

“I forgave my parents,” the transcript reads. “I realized that whatever happened needed to happen.”

For Natalie, there were few difficulties and there wasn’t a negative aspect to the trip.

“I was just there to enjoy everything,” she said. “I didn’t have a difficult or bad time there, I enjoyed it all.”

According to the show’s transcripts, Natalie’s biological sister, Nastia Pugacheva, who was raised in orphanages, and the other siblings, didn’t care to meet their mother, but Natalie said that she would still like to. Unfortunately, Natalie’s biological mother was unable to attend the show due to an illness, according to transcripts of the show. However, she was able to view a video of her mother, which the show produced and aired during the taping, to provide the children some insight into their biological mother’s life.

“Don’t think that if I lost you, I forgot you,” Natalie’s mother said, according to the show’s transcripts. “I see you often in my dreams.”

The sisters had very different reactions to their mother’s message. According to the transcripts, Nastia said that she felt her mother was lying about why they were taken to the orphanage. Natalie had a more gentle reaction.

“I do forgive her,” Natalie is quoted in the transcript. “I would like to meet her, but I would just like to say goodbye.”

Samantha was apprehensive about seeing her parents but ultimately was happy that she was able to see them.

“It was really good,” Samantha said. “I’m glad I went. I’m glad my parents know that I’m not mad at them or that I forgive them, that is the only part that I really wanted them to know.”

Her excitement focused on reuniting with her older sister, Olya, who cared for her a lot of the time when she was young, Samantha said.

“The best part for me was seeing my big sister,” she said, smiling. “I feel like I’m closest to her, and it was, like, the best time.”

Samantha wanted to see her sister since she was taken to the orphanage. Samantha said that her sister told her that she had looked for her while she was at the orphanage but someone had informed her early on that Samantha had been adopted, which was untrue at the time, so her sister stopped looking for her. The reunion was a blessing, in Samantha’s opinion.

“I thank God every day for this beautiful sister that I have!” read a post on Samantha’s Facebook above her sister’s photo. “Finally I found her again.”

According to a translated transcript of the show, provided by the Stoeszes, Lyudmilla was uncomfortable at first with the idea of seeing her daughter after such a long time.

“I just realized how I would feel,” Lyudmilla said according to the show’s transcript. “I have just felt out of place all those years. I just worried about her all this time. My thoughts have always been with her, always. And I just couldn’t imagine what this meeting would be.”

“It was hard to let my sister go, because I felt she was the only person that was there for me when I needed her,” Samantha said.