Two Berthoud veterans want to start a Berthoud VFW post to not only have something closer to home, but with more of a community focus. 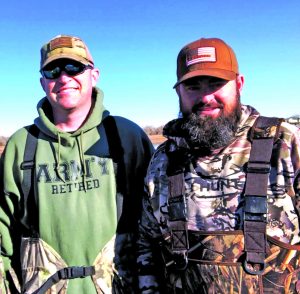 Courtesy photo – Kraig Patriquin, left, and Ryan Armagost of Berthoud want to start a Veterans of Foreign Wars post to serve Berthoud residents. They need 25 members and 10 who are new to the VFW.

“What we would like as far as our Berthoud VFW is an organization that is a group of Veterans of Foreign Wars that represents the veteran population of Berthoud, stands for veterans’ rights, participates in the community, comes together for social events with our families and, most importantly, be there for each other as we once were overseas,” said Kraig Patriquin who, along with Ryan Armagost, will serve as a founding member once the post is formed.

Patriquin wants to move away from the perception that VFW posts are places for a bunch of war veterans to sit at the bar, drinking beer and telling war stories. He aims to bring in younger veterans and, like Armagost, increase veteran engagement in the nonprofit veterans’ service organization.

Patriquin, a social worker for the Veterans Administration, served in the U.S. Army from 2001 to 2011 as a staff sergeant in three combat tours in Iraq. Armagost, a deputy with the Larimer County Sheriff’s Office, served in the U.S. Marine Corps and then in the Army from 1995 to 2017 as sergeant first class. He served two tours in Iraq and one deployment to Guantanamo, Cuba.

To join a VFW post, members have to be, like the name states, veterans of foreign wars, while members of an American Legion post are required to have served in the military during a time of war.

“We, as a growing community, I think there is a need for veterans of foreign wars to have a place to come together,” Patriquin said.

To have that place, Patriquin and Armagost are recruiting members from the Berthoud area and hope to submit an application to national headquarters in Kansas City, Mo., within the next two months. They need 25 members to sign up on a roster, including 10 who are new to the organization. So far they have five members and three more who have expressed interest from seeing a post on the Berthoud Community Facebook page.

Patriquin estimates one-fourth of the 67 members of the Justin Bauer Memorial American Legion Post 67 in Berthoud are eligible to join a VFW post. He serves as commander and Armagost as a member.

“We know there’s hundreds of veterans in Berthoud. We don’t know how many veterans are eligible for VFW,” Patriquin said. “Our biggest challenge is to identify Veterans of Foreign Wars that might want to be part of the organization.”

Patriquin and Armagost plan to contact the Loveland and Longmont VFWs to see if there are Berthoud members interested in joining a post closer to home.

“The biggest conflict people have to participating in these is the travel,” Armagost said, adding a new post will mean “they don’t have far to travel. It’s our hometown group where they can be proud to be part of the VFW.”

Once there are enough members the Berthoud VFW likely would meet monthly, or as often as members determine. The post has been offered three locations to hold the meetings, including the Berthoud Lion’s Club, 600 Third St., the Berthoud Area Community Center, 275 Mountain Ave., and Berthoud Town Hall, 807 Mountain Ave.

The post will be active in community, social and outdoor events, engage in fundraisers, provide community service, offer youth scholarships, and help out other veterans who may be struggling financially, medically or emotionally.

“We want to be more active in the community, with youth and other community-based organizations,” Patriquin said.

The post also will need a minimum of two board members, a president, and treasurer. Once the post meets all of the requirements and is approved it will receive a kit that will include a VFW flag and paperwork to apply for nonprofit status.

“For veterans, it’s a comfort to know you’re surrounded by other veterans,” Patriquin said. “There’s instant rapport, instant brotherhood. … You have stuff to talk about right away. In some cases, you don’t have to say anything.”

For more information about the Berthoud VFW, email [email protected]