Double Feature: “The Sandman” is delightfully dark & Cirque Du Soleil is coming to town this week

“The Sandman,” a new series on Netflix, is an engaging and richly developed series based on Neil Gaiman’s beloved comic books. This series of ten episodes (and a sur 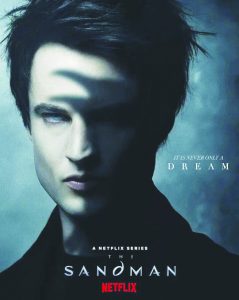 prise eleventh being dropped a week later) follow The King of Dreams and his importance to the balance of our world. The series is richly done with fantastic characters and production values that draw you into the world Gaiman created some thirty years plus ago. The Sandman is a series on which Netflix spent money and time on and it shows in every episode. I admit I knew nothing about this comic book or the Endless, a family of beings who appear in the comic books published by DC Comics. The members of the family include Death, Delirium, Desire, Despair, Destiny, Destruction, and Dream also called The Sandman. I went into watching this series blind. I am not usually a comic book fan, and when I heard this was being produced, it didn’t excite me. But I decided to give the series a try. The intriguing story and mystical surroundings drew me in quickly and kept me wanting more. I binge-watched the entire original ten episodes in a weekend, which is hard considering they are an hour each. I could not stop! The Eleventh episode, which dropped a week later, is a stand-alone two-part story that can be watched separately.

The original 75 issues of The Sandman were published from 1989-96 and are beloved by comic book fans worldwide, so Netflix had a ton of pressure to deliver a solid series from a story that many believed couldn’t be interpreted in a theatric form. The series has a plot that is different from the typical comic book and with characters that I found exciting and engaging. They are wonderfully varied and fun to watch. You will never think of Cereal in the same way again. One of the things I enjoyed was the variety of each episode. This show does have a plot that continues with each episode, butut each has its own story, like strings from the mythical Fates (who also make an appearance here and there). The Strings are woven into a fabric of the whole narrative. The second half of the series feels almost like a different story than the first half, with a decidedly different tone, and by the end, they feel like they all belong together. Some episodes are touching and heart-pulling, while others are decidedly darker and more sinister in nature. Episode six, in particular, is disturbing and graphic, as good as any well-crafted horror movie. This show is not for children, as some episodes’ subject matter and graphic nature are intense. If you are squeamish, episode 6, is hard to sit through. But it is worth seeing the world Netflix spun from Fate’s strings.

Ovo a story of Bugs, Love and Laughter 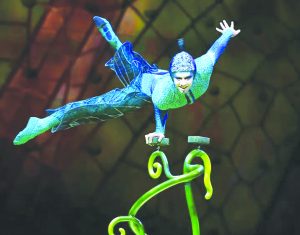 The bug-themed acrobatic production of Ovo, a story filled with love and a huge mysterious egg is fluttering into Loveland August 26-28th. Ovo is one of the traveling Cirque Du Soleil productions that enchant audiences worldwide. The Montreal-based company is known for unusual spectacles that are feats of mystical magic on a grand scale. Originally conceived as one of their massive tent shows, Ovo has been reimagined to fit in arenas like the Budweiser Center, so more audiences around the globe can experience the crazy bug-filled world of Cirque’s imaginative show. There is a massive video wall with incredible projections, an immense 22-foot-tall egg (hence the name Ovo), and a trapeze rig 45 feet in the air, among other incredible experiences.

As with every Cirque show, a plot is explained through more actions and songs than words, making their shows accessible to languages worldwide. However, you don’t have to understand the story to enjoy a Cirque Du Soleil’s production of wild antics and fantastic acrobatics. Ovo is full of bright, colorful costumes and impressive set pieces that will delight even the most cynical teenager or a grumpy old man. If you have never seen a Cirque show, they are always incredibly entertaining and worth checking out. Tickets are still available as of this writing on Tuesday, August 23rd, through the Cirque Du Soleil website or at The Budweiser box office. I have had the privilege of seeing several Cirque shows over the years in different places, from Tent shows in New York to sit-down shows in Disney World and Las Vegas. I have been blown away every time. And eagerly wait to see this production of Ovo when it hatches this weekend.