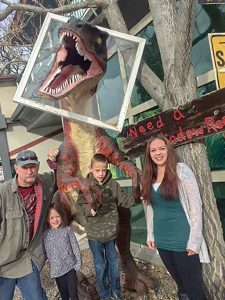 Heading west out of the Berthoud roundabout, it’s impossible to miss Chewy. Just one year after arriving at his new home, the big toothy dinosaur with the broken pane of glass around his neck has already solidified his status as a local landmark.

The first decade of Chewy’s existence was spent outside Hawg Wild Custom Cycles on Lincoln Avenue in Loveland, but his new owner, Amber Davis, said he was destined to land in Berthoud long before his arrival at Abbott Glass and Door Repair last year.

“It all started eight years ago,” said Davis. “My husband and I drove by Hawg Wild and I said ‘Oh my gosh, wouldn’t that be cool to have!’”

Convincing Davis’ husband Keith to get on board was the easy part, according to Davis. She outlined her plan to put the broken pane of glass over Chewy’s head and use him for advertising, and the second-generation owner of the local glass shop agreed the idea had merit.

Striking a deal with Chewy’s former owner, Ed Honebein, took a bit longer. Honebein had picked up the dinosaur 10 years ago on a road trip to California, at what he referred to as a “fancy place that sold a lot of weird [stuff].”

“Chewy was already a bit of an icon over at Hawg Wild,” said Davis. “Ed was willing to sell him, but we couldn’t agree on a price.”

For years Davis, her husband, and their two children drove by Chewy regularly, and every time they did they stopped in to bargain with Honebein.

“We gave him the name Chewy early on,” said Davis. “We’d drive by and we’d all say hi to Chewy, and I’d tell the kids, ‘That dinosaur’s going to come home with us someday!’”

After eight long years, the Davises and Honebein struck a deal. Chewy was moving to Berthoud, but under one condition.

“Ed said we had to agree to put Chewy somewhere where people could see him and enjoy him,” said Davis. “Of course that was our plan all along.”

Once the sale was finalized, the Davises set to work getting Chewy ready for his big unveiling. She and Keith brought him to their shop to restore him with a few clear coats of shiny new paint.

“We knew Chewy would either be an epic win or an epic fail with the community,” said Davis. “When we finally put him outside, the reaction to him was fantastic. Everyone that stopped by was laughing – it was good laughter.”

Davis said people frequently ask her what a dinosaur has to do with glass.

“I say technically nothing,” she said. “But it makes people stop and look.”

“Chewy has definitely become a family member,” said Davis, who admitted to brushing snow off the dinosaur before worrying about her car on winter mornings, and who handmade a Santa hat for him last Christmas because she couldn’t find any that fit his “big head.”

“We just love him and a lot of other people do too,” said Davis. “It has definitely been the reaction we were hoping for.”

As for Honebein, he didn’t know whether another dinosaur would ever appear in front of Hawg Wild Custom Cycles, but said he might pick one up if he’s ever in California again.

“It’s an exciting trip coming home with a dinosaur,” said Honebein. “The looks you get coming down the highway with him on the back of a trailer with his mouth hanging open are pretty interesting.”