During the presentation Mallette reported the construction on Larimer County Road (LCR) 17 from LCR 16 southward to Highway 287, will probably not get underway until late summer/early fall of this year. The project calls for a widening of the roadway to accommodate three lanes, with the center lane being a turn lane, and widened shoulders. (LCR 17 has been renamed Berthoud Parkway.) Larimer County is waiting for a second roundabout to be completed before beginning construction. 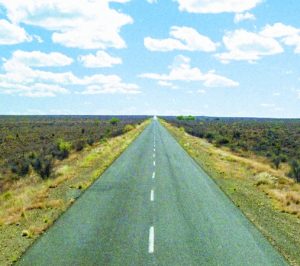 Richard McCabe, a partner in the PrairieStar development, in an email to the Surveyor stated one of the roundabouts which was to serve PrairieStar has been removed from the plans. According to the message from McCabe it was decided three roundabouts in the space of about three quarters of a mile was too many. The roundabout eliminated from the plan was one which would have been connected to Wagon Bend Road, the northernmost street of the PrairieStar development. The roundabout retained in the plan, is to be located approximately 600 feet north of the Highway 287 intersection with Berthoud Parkway. Construction of this roundabout will commence April 1, pending approval of the roundabout plans. The street which will be served by the roundabout to be constructed is named Grand Market Avenue.

Mallette addressed another project which will affect the travel plans of Berthoud residents for three to four years after the project commences, and that is the widening of Interstate 25 from Highway 14 in northeast Fort Collins to the highway 402 interchange in southeast Loveland.

She stated the project would add two lanes in each direction, with one lane each way being a “managed lane.” Vehicles that have three or more passengers, motorcycles, and drivers willing to pay a toll will be allowed to use the managed lane. She indicated contractors had been selected for the project, with a three-year construction window.

She reported an environmental impact study called for four lanes in each direction of I-25. The funding for the stretch of the interstate now being considered for construction was so tight CDOT decided part of the funding for the project would have to come from the toll monies collected from the revenue of the managed lanes.

Mallette added the interchange at 402 would be completely rebuilt. She noted 402 currently passes under the interstate, however, future plans call for 402 to go over the interstate. The approaches made by the frontage road, the on ramps, and the exit ramps will also be modified.

She was unsure when the remaining gap (from the highway 402 interchange to highway 56 – Berthoud interchange) will be started. CDOT is struggling to find funding for that section as well.

Mallette stated the major competition for money for interstate improvements is the stretch of I-25 from south Denver to north Castle Rock. This section of I-25 is in need of additional lanes and other improvements as well.

Questions centered on I-25 at the Berthoud interchange which were brought up by audience members were:

Will funds President Trump has promised for rebuilding the nation’s infrastructure be able to be used for some of the I-25 improvements? The answer was yes and no. The issue with the money that will be coming out of Washington D.C. is that the funding will be capped at 20 percent of the cost of the project, so it will help, but local government must come up with the rest of the funding, explained Mallette.

Will the bridge across Little Thompson River be widened to allow lengthening of the southbound “on-ramp” at the Highway 56 interchange? Mallette stated she did not know the answer, but offered to find out and get the information to the questioner. This last item is of great concern to area residents who consider the southbound on-ramp a danger.

State Senator Kevin Lundberg will be hosting a town-hall-type meeting to address the issue. A press release from his office states:

“There is a significant danger to Colorado drivers who enter I-25 south-bound from State Highway 56 (the highway from Berthoud). The on-ramp is just too short and, even though there is a third lane climbing Berthoud Hill, there is a bridge which chokes the traffic down to two lanes right between the short on-ramp and the third lane. Added to this problem is a large truck stop scheduled to open this year right at this intersection.
After many local residents brought this to my attention I spoke with the CDOT several times and I am not convinced CDOT fully appreciates the safety risks at this intersection. One truck driver told me he thought it was the most unsafe intersection on I-25.
I think the next step we need to take is to let the citizens in the area tell CDOT directly what they think about this situation. Therefore, I will be holding a town-hall meeting on March 24 at 3 p.m. to discuss this problem. The regional director for CDOT has agreed to attend. The location will be the Berthoud Community Center at 248 Welch Ave., Berthoud.”

Lundberg is encouraging all interested area residents to attend.