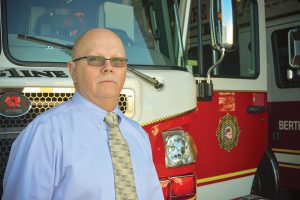 Berthoud Fire Protection District Chief Steve Charles stands in front of an Engine at Station I in Berthoud on Mountain Avenue. Charles has been with
the fire department for more than 30 years as a volunteer and paid firefighter. He’s been chief for 22 of those years.
John Gardner / The Surveyor

Christmas Eve, 1992, is a day that stands out in Steve Charles’ mind. The Berthoud Fire Protection District chief was with his fellow firefighters on that dark night as the iconic Berthoud institution, the Wayside Inn, burned to the ground – it was his first year as the department’s chief.

“[The Wayside] was a landmark in the Berthoud community,” Charles said, remembering the events from behind his desk at the firehouse in Berthoud. “[The fire] impacted the owner, the employees, and the people who traveled miles to eat at the Wayside.”

It’s an event the community remembers well. And it’s an event that stands out in Charles’ mind when he reflects on his 30-plus-year career with Berthoud Fire.

“We came close to injuring or losing three firefighters in that incident,” Charles said.

Charles’ career didn’t start with a fire hose in hand, but with a police badge on his chest.

In 1976, Charles’ career in law enforcement started in La Mesa, Calif. He continued this work after moving to Colorado. One of his first jobs was as a park ranger at the Cherry Creek Reservoir. He did a short stint with the Berthoud Police Department and then served as a detective for the Larimer County Sheriff’s Department.

In his low-key manner, the chief recounted how he came to be a 30-year paid firefighter in Berthoud, from 1985 to the present. Charles stressed the “paid” part of his job because for five years, between 1980 and 1985, he served as a volunteer fireman in Berthoud. So, depending on one’s perspective, this is his 30th or 35th anniversary at the department.

The life of the long-term chief started 65 years ago in East Cleveland, Ohio. Although he only lived in Ohio for the first 12 years of his life, he acknowledges his roots and said he still proudly cheers for the Cleveland Indians and Cleveland Browns.

Right before his teen years, his family relocated to San Diego, Calif. Charles went to high school there and later attended San Diego Mesa Community College. The chief majored in fire science and fire protection. Additionally, he is a graduate of the National Fire Academy’s four-year program. He occasionally teaches at Aims College in their fire science classes.

He married his high school sweetheart, Marlene, and they have three children: Josh, Tessa, and their youngest son, Mathew.

Vacations in Colorado and relatives in southwest Denver caused the couple to relocate to Denver in February 1976.

“It seemed like it took forever to get here,” Charles said.

Labelling the move to Colorado as a “blessing,” Charles said, “I am a believer. God brought us to Colorado for a reason.”

After deciding not to live in a large city, the family found a spot they liked in Berthoud. They moved here that summer. The Charleses found a nice eight-acre place northwest of Berthoud where they still reside. The chief’s mother-in-law lives in the original house on the property.

The grandfather of six says being at home is his way of relaxing away from the firehouse. Charles said he does not hunt but likes to fish, especially with his youngest son. The duo also shares an interest in watching bull riding and football on television.

It wasn’t until 1985 when Charles heard of an opening at the local fire department in Berthoud and thought to apply.

“This turned out to be a very good move,” Charles said.

The firefighting force in Berthoud in 1985 bears no resemblance to the current-day force in terms of numbers. When Charles hired on in 1985, the department only had two paid employees – he was one of them. His duties then included being the fire inspector and establishing the fire prevention bureau. The following year, a third employee came onboard. Volunteers picked up the slack, responding to fires and other duties.

Charles pointed out that the department has a swift-water dive-rescue team and employs wildfire firefighters. These seasonal wildfire fighters are paid when deployed. He rattled off past deployment locations including California, Washington, Arizona, New Mexico, Florida, Georgia and Nebraska.

As Berthoud grew and expanded geographically, a second station became necessary. In 1998, the Fire Protection District Board approved a bond allowing for construction of a second fire station. This station’s location is 4014 West County Road 8, west of Berthoud. He credits the board and the support of the district’s taxpayers for expansion for the new station.

Reduced response times in the western area are the biggest benefit of the new station, according to Charles.

Charles credits the board for its overall support. Although the membership of the board changes over the years, “their vision hasn’t,” he said.

“They don’t just look at today but see where we need to be,” said Charles. Additionally, he pointed out that this vision has stayed the same even as board members changed over the years.

The chief still enjoys his job, if you can call it a job. He compared his successful career to that of Tom Brady and the Super Bowl champion New England Patriots.

“Any success as a firefighter is due to those who surround me,” said the always-humble chief, reflecting on his past, adding, “The staff makes my job easy.”

“Any success is their efforts as well as mine,” he said.

A lot of people would likely call it quits after more than three decades at work, but not the quiet leader of the men and women of Berthoud’s fire department. However, he didn’t want to be pinned down on any future plans, either.

He plans to stay as long as he can or “as long as the board will have me,” he said with a hint of a smile.