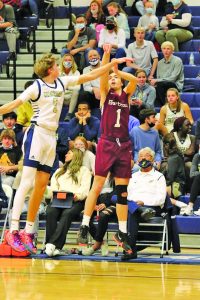 Photo by ACP Media – Berthoud senior Jesse Young goes up for a shot in a game against Frederick earlier this season.

While the wins have yet to come in large numbers, the Berthoud High School (BHS) boys basketball team plays with a gritty determination and a no-quit attitude. While the Spartan’s most recent game – played last Friday night against Thompson Valley High School (TVHS), led by former Berthoud Head Coach Mike Burkett – ended in their guests favor, 86-54, the Spartans, as they have all year, fought for the full 32-minute contest.

The Spartans matched the Eagles with 12 points in the opening quarter, two three-pointers from Berthoud senior Jesse Young, one from each side of the arc, in the final minute of the quarter gave the Spartans a jolt of energy. Yet TVHS was able to find their groove in the second quarter, hanging 26 points on the board to the Spartans’ eight to take a commanding 38-20 lead into the locker room.

The Eagles did not relent in the third quarter as poured it on, scoring a whopping 36 points in the eight-minute stanza. The Spartans, however, as they have all season long under the leadership of first-year head coach Lee Espinoza, kept battling. Even with the game well out of reach, Berthoud managed to outscore TVHS 15-12 in the final quarter to end the game on something of a high note.

Ultimately, the difference in the game came down to the fundamental aspect of basketball – taking and making shots than the opposing team. TVHS shot a stout 52% (32 for 61) from the floor, a mark which included 67% mark from the two-point range. Three Eagle underclassmen, sophomore Brady Kennison (20 points), junior Tristan Youngblood (18) and freshman Elijah Melendez (10) led the team in scoring on the night. For Berthoud, star sophomore paced all scorers with 21 points on the night while May added another 10 points to go with a team-high eight rebounds. The Spartans were able to out-rebound the Eagles on the night, pulling down 30 boards to the Eagles’ 27.

Berthoud (2-11, 0-3 conf.) will travel to Loveland on Saturday to take on Mountain View 94-8, 0-3 conf.) in a game where both squads will be seeking their first Longs Peak League win of the season. The Spartans will welcome Fort Morgan to the Rusty Mathena Gymnasium at BHS on Tuesday.

When the BHS girls basketball team traveled up the road to Loveland to face rival Thompson Valley last Friday night in a game that featured a matchup to two top-10 teams, a 32-minute game really felt more like three different games rolled into one.

The Lady Eagles proved able to sandwich their two sustained scoring outbursts around Berthoud’s furious comeback attempt in the middle portion of the game. When all was said and done, it was TVHS who took the game by a 57-42 final score in what was one of the more unique exhibitions of the game of basketball that one will ever see.

TVHS came out of the gates quickly, building an 8-2 lead through the first half of the opening quarter while Berthoud appeared a little bit flat-footed, with multiple shot attempts missing short. The Lady Eagles also took advantage of Berthoud getting into early foul trouble – TVHS was in the bonus less than a minute into the second period. TVHS built their lead to 14-4 after the first quarter and followed it up with a 7-0 scoring run to take a considerable lead, 22-4 at the 5:28 mark of the second quarter.

Berthoud did not let the large deficit faze them, however, and the trio of Aidan Carr, Paige Farnam and Ally Padilla made some big plays to end the period with Berthoud rallying to cut their host’s lead to 22-16 at halftime.

Carr turned in a particularly strong performance during the Lady Spartans frenzied comeback attempt, making good on multiple shot attempts both from the floor and from the free-throw line. The junior swished two from the charity stripe that got Berthoud as close as they would get, 31-26 with 3:42 left in the third. Yet, the Lady Eagles came roaring back, re-finding their groove and steadily pulling away over the final 12 minutes of play.

“That resiliency and ability to come back and especially finish strong in the second half has been a constant for our team this year,” Berthoud Head Coach Alan Gibson said. “What made Friday’s game different was the 22-4 deficit. Felt like we spent our second-half energy in the first half and just didn’t have enough to get all the way back.”

Carr led all players with 24 points and also pulled down a Berthoud team-high 10 rebounds to record her sixth double-double of the season. Padilla chipped in another 10 points for Berthoud but the Lady Spartans, uncharacteristically, attempted a season-low nine free throws in the game, all from Carr, and made good on only three of 23 attempts from three-point range.

Gibson explained the loss will provide a learning experience for the entire squad saying, “I go back to Thursday’s practice and the amount of emphasis I placed on the opponent rather than ourselves. That’s a lesson I certainly learned, and I hope I never get our girls in a bad spot like that again. Going forward we will focus on ‘us’ and not ‘them.’”