It came as no surprise to Berthoud High School head volleyball coach Daisha Agho that her team secured a top-12 place in Class 4A and with it the right to host this weekend’s upcoming regionals.

After all, Agho’s Lady Spartans 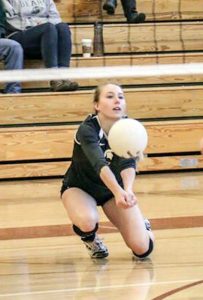 Berthoud libero Haley Hummel leads the state in class 4A in digs with 650 and is one of the reasons for the teams strong performance in recent weeks.
Paula Megenhardt / The Surveyor

were winners of five of their last six matches, finished in a tie for third place in the ultra-competitive Tri-Valley Conference (TVC) and had a number of quality wins, including a 3-2 victory over seven-seed and conference rival Windsor less than two weeks before the brackets were finalized, on their resume.

“I knew after the Windsor game that that was going to be a pretty solidified position if we did well at Golden,” Agho said, explaining that a solid showing at the Golden tournament on Oct. 31, where Berthoud won three of their four matches, would all but guarantee hosting rights.

According to Agho and the two seniors on her squad – libero Haley Hummel and middle Emily Trujillo – the Lady Spartans are playing their best at the most important time of the season, and a mid-season four-game losing streak helped propel Berthoud to this position.

“During the middle of the season, when we had the couple of losses that we had, I think it made us focus in practice on why we were wrong and why we weren’t getting those wins,” Trujillo, who leads the Lady Spartans with 58 total blocks, explained.

“The girls obviously are very competitive, and I think [the losing streak] sparked a good interest in them figuring out where their weaknesses were in the last part of the season,” Agho said. “They are finally getting to see the big picture, executing the little things.”

Agho explained that focusing on the “little things,” like defense and communication, will be the determining factor in how deep of a run Berthoud can make this postseason.

In Hummel, the Lady Spartans have one of the finest defensive players in the state, as the senior leads all of Class 4A with 650 digs. It is not something Hummel says she focuses on, but it does provide a degree of motivation.

“When I’m in the game I’m not thinking ‘oh I need to get this pass, I need to get this dig to boost my stats,’ but … it kind of motivates me,” Hummel said. “I don’t consider myself the best libero in the state but I am pretty proud of my defense and it motivates me to go for every ball, even if I don’t think I can get it.”

Both Hummel and Trujillo explained that knowing the end of their high school volleyball careers is in sight provides them with extra motivation to succeed this postseason.

“It definitely pushes me, because I want to go out and win and keep going as far as we can because it is my last season.” Hummel called it a “positive motivator,” and added, “It’s kind of an emotional time for me, but I’m definitely going make the best out of it and make it worth it.”