It’s often the journey, not the final destination, that’s the most memorable. 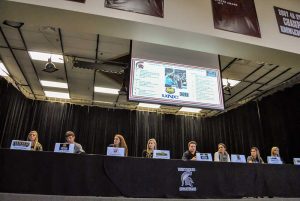 Left to right: Berthoud seniors Taylor Armitage, Isaac Bracken, Kristina Cavey, Kelly Chamberlain, Jimmy Fate, Sydney Kouns, Josie Spitz, and Alyssa Strong prepare to sign their respective letters of intent to continue their athletic careers in college. It was the most Berthoud High School has had sign letters at one time.
John Gardner / The Surveyor

For eight Berthoud High School seniors, the final destination – signing national letters of intent on Nov. 11 to play intercollegiate athletics – was the specular view of the ocean. But it was the recruitment process – the visits to various campuses, the meetings with coaches and potential teammates, the wrangling over whom to choose and whom to disappoint – that was the long, arduous drive through the barren desert.

According to Jimmy Fate, the two-time state champion wrestler will soon begin the process of going for a school-record third title, the decision of where he wanted to continue his wrestling career was among the hardest he has ever had to make. Fate was recruited by schools all across the country and knew he was going to have to disappoint all but one of them.

“I wouldn’t trade the experience for the world, but at the same time I wouldn’t want to go through it again,” Fate said of the recruitment process that ended when he put pen – made from the wood of the old BHS bleachers – to paper and committed his services to the wrestling program at the University of Northern Colorado (UNC).

“It helps you grow as a person, and there’s things like that that you’re going to have to go through in life, so it’s better to get it out of the way now and get used to it,” Fate said. “I’ve learned to do what’s going to make me happy. With a big family and lot of friends and living in a small community, I’ve strived to make everyone happy, but I knew with this there was no way I was going to make everyone happy with the decision I made, so at that point I just had to say, ‘Okay, Jimmy, do what makes you happy’ and I think that’s how I grew the most through this process.” 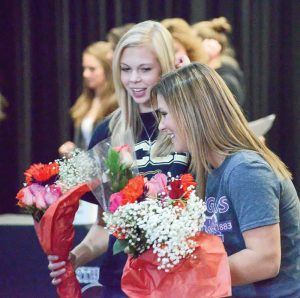 Alyssa Strong, left, and Josie Spitz receive
flowers from family after signing their letters of
intent on Nov. 11 in the BHS commons.
John Gardner / The Surveyor

In their own unique ways, the decision of where to play at the next level provided an invaluable learning experience for each of the eight young men and women that all attested helped them grow as individuals.

Softball player Sydney Kouns, who will play for Trinidad State after visiting and “falling in love with the campus,” had a slightly different route than some of her more highly-recruited teammates and classmates. Kouns, who had a solid understanding of the process, having watched her older sister, Sami Kouns, go through it just a couple years ago, said reaching out to coaches at summer softball camps helped get her on the radar.

“I’m not the type of player that a lot of coaches are looking for but I know that all teams need players like me and I had to show them that. I’ve learned a lot about myself through all of this and that actually really helped,” Kouns said after signing her letter. “I’ve learned that it’s okay to put myself out there, it’s okay to be in the spotlight, but just be humble about it.”

For baseball player Issac Bracken, who also chose UNC, the process only helped to reinforce the idea that those things worth having are worth working for. Bracken, who despite leading the Tri Valley Conference in batting average, homeruns, slugging percentage, on-base average, and RBI as a junior, did not receive the amount of attention from out-of-state schools he expected. It wasn’t until a trip to a camp at UNC where he impressed the coaches and got the scholarship offer he was seeking. 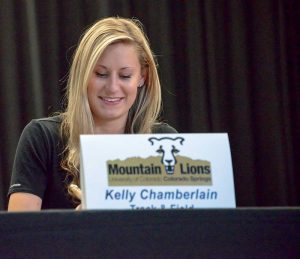 Kelly Chamberlain signs her letter of intent at the ceremony at Berthoud High School on Nov. 11.
John Gardner / The Surveyor

“I learned that it takes a ton of work. I never got the reps as a lot of guys from out of state where the weather is nicer all year,” Bracken said. “I’ve had to put a ton of work in and I will have to put in a ton more to be able to play baseball in college.”

Bracken said his goal is eventually to play professionally, and he believes the hard work he has put in and will continue to put in is what it will take to get there.

While the octet who signed national letters in front of friends and family in the BHS commons are all standout athletes, they also share the fact they are all excellent students. With GPAs ranging from 3.77 to 4.116, this group is well-represented on numerous academic all-state teams. For some, the decision of where to play was heavily influenced by academics.

Like Berthoud’s standout softball pitcher, Taylor Armitage, who will play softball at Regis University in Denver said, “The academics played a huge factor throughout this whole process. I can continue my softball career at Regis while getting a very good education.” 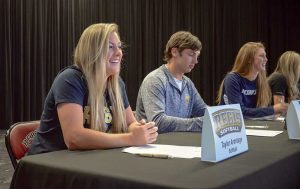 Taylor Armitage, left, smiles at family prior to the Letter-of-Intent signing ceremony at Berthoud High School on Nov. 11, along with Isaac Bracken, middle, and Kristina Cavey, right.
John Gardner / The Surveyor

Josie Spitz, who holds the BHS record for pole vault, echoed some of what Armitage said regarding academics playing a large factor in her decision to sign with the University of Sioux Falls in South Dakota for track and field and wants to study exercise science.

“It all came down to what I thought was most important,” Spitz said. “They had the better major for what I want to go into.”

While Kristina Cavey, who in addition to boasting a 4.0 GPA is also the president of the student council and 4-H club, said academics was a factor in her decision to commit to play basketball at Fresno State Univsersity. Her decision was most heavily influenced by where she believed could best help her reach her potential as a player.

“My major decision factor was where can I be the best, where is it that has a program that will make me a better player,” she said. “I just wanted to make sure the program could make me the best I could be, physically and mentally.”

Bracken, Cavey, Fate and Spitz, as well as Alyssa Strong and Kelly Chamberlain, both of whom committed to the track-and-field team at the University of Colorado – Colorado Springs, all finished the recruiting process and made their decisions official before their final season of high school begins. Kouns and Armitage have already finished their final season of high school softball. 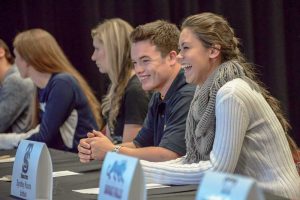 Cavey explained it is a tremendous relief to have the decision behind her and now can move onto her final basketball and track seasons.

“I don’t think people understand the process of recruiting. It’s definitely more difficult than it seems. It takes a lot of hours out of your week, out of practice time, so now I can focus on practicing and playing without having to worry about where I’m going,” Cavey said.

“All of a sudden we had a lot of signings come down all at one time, “ Scheck explained, “so we started talking and kicking the idea around with them and the parents and it all just came together.”

Scheck said the student athletes and their parents all liked the idea of doing the signing together, with each athlete being introduced by a person of their choosing; in all cases it was either a parent or coach. It gave each individual their moment in the sun, having decided to hold the ceremony immediately after school, a large number of their fellow students and BHS faculty were able to attend. It was a memorable way for the octet to formally conclude the recruitment process that most spent the better part of a year traversing.

2015 BHS athletes who signed their letters of intent on Nov. 11: