Leaving it all on the mat 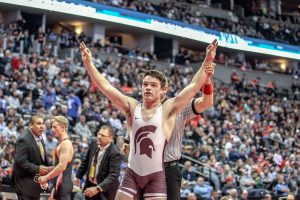 In the athletics world there may be no better measure of greatness than the ability to make the difficult look easy.

In winning his school-record third state wrestling title at the Pepsi Center on Saturday, Feb. 20, that is precisely what Berthoud High School (BHS) senior wrestler Jimmy Fate did.

“It feels great to tie to the school record; I’m grateful for all the people along the way, all the coaches, all the teammates that helped me get there,” Fate said as he caught his breath after his title bout. “That’s all you can be is grateful; I wouldn’t change anything.”

Fate won his preliminary round match by pinning Chris Keller of Alamosa in just 31 seconds. In the quarterfinals it took Fate 41 seconds to pin Eric Todd of Estes Park. Fate got a hold of Todd’s right leg almost immediately after the bout began and took him down with a leg sweep five seconds into the match. Todd put up something of a fight for the remaining half-minute but never got out of Fate’s grasp before succumbing to the pin.

Dax Bender of La Junta, Fate’s opponent in the semifinals, was the only competitor Fate did not pin in route to his title. It took 3:31 for Fate to rack up a 16-1 lead, winning the match via technical fall. After wrestling out of bounds to begin the championship match, Fate was on top in the referee’s position and did not allow Hayden Johnson to escape, getting the Steamboat Springs sophomore prone before using his legs to turn Johnson over and onto his back. Johnson battled, but Fate had his arms locked behind his back and used his torso to pin Johnson to the mat. It took just 55 seconds, less than half a period, for Fate to seal his third-straight state title, tying the BHS school record. 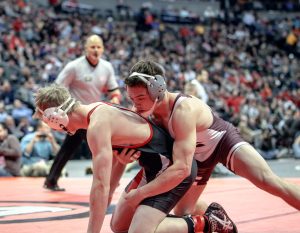 Fate was actually very close to being a four-time champ, a feat that has been accomplished only 19 times in the history of the state. As a freshman he took fourth place at state, losing in the semifinals and in the third-place match to opponents he had beaten earlier in the season. It was those losses, Fate explained, that gave him the motivation to return in each of the next three years to take the gold medal.

“It took me a lot to get my spirits up, because coming in as a freshman everyone’s goal is to be a four-timer so [those losses] were very hard for me. I was pretty upset. I remember sitting in a hall just a wreck,” Fate said. “My coaches really helped me; [they] talked me through it. It made me think I’ve got a lot of work to do to get to the finals.”

Fate said one of his mantras is that one learns more from a loss than from a win, calling it “one of the true statements in sports,” and adding, “ever since I’ve been little my dad has always told me, ‘you’ve always been better after you’ve lost.’ Whether it was a tight match or I got beat pretty bad, I’ve always figured out a way to improve.”

That inspiration was at play this season as well. Fate lost a pair of matches to his friend and workout partner Parker Simington of Thompson Valley, who himself won this year’s state title in Class 4A.

While Fate made his four victories at state look easy, he explained the road there was anything but.

As a four-time medalist, three-time state champion on a resume that also includes an impressive four years on the football field, Fate graduates in May as one of the top athletes in BHS history.