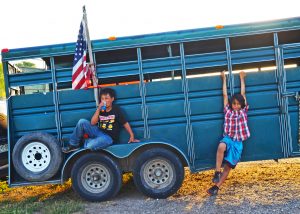 Photo by Amber McIver-Traywick – Cousins (L-R) Thomas Belt, 11, and Levi Rouillard, 10, hang around one of the horse trailers that follow riders on the Lakota Ride 2018. The organization that sponsors the ride, Tipi Raisers is made a 400-mile journey from Sedalia, Colo., to the Pine Ridge Reservation in South Dakota. The group stopped over in Berthoud at the Little Thompson Observatory (LTO) to enjoy dinner provided by LTO members and a presentation on the Lakota constellation mural inside the facility.

Seeing a dozen horses running alongside Highway 287 isn’t what you’d normally expect to see on your commute home to Berthoud, but on Wednesday, July 18, around 5 p.m. that’s exactly what you would have encountered. Riders from the Tipi Raisers non-profit organization, along with their entourage of horse trailers and support vehicles, stopped over for the night in Berthoud during the Lakota Ride 2018, an event held to bring unity and awareness of issues facing the Lakota people living in the Pine Ridge Reservation in South Dakota. The riders began their journey on July 14 in Sedalia, Colo., 25 miles south of Denver, and ended on the Pine Ridge Reservation on Aug. 4. 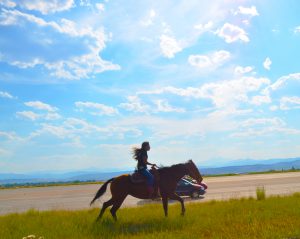 Photo by Amber McIver-Traywick – A rider makes her way along Highway 287 heading into Berthoud on July 18.

Riders of various ages and backgrounds from across the country, both Lakota and non-Lakota people, raise money to be a part of the ride, some just for a day and others for the full three weeks. Horses have been an important part of Lakota culture for centuries, and the ride was a natural extension of that history. Riders who came into Berthoud that day were from the reservation, Maryland, Wisconsin, Texas, students from the University of Georgia, and towns all across the Front Range.

Denver native Dave Ventimiglia, executive director of the organization, who is leading the group, was accompanied by both his son and daughter on this ride. “Our goal is to help address some of the poverty issues up there as well as bridge the gap between Lakota people and non-Lakota people,” he said while speaking to a packed room at the Little Thompson Observatory (LTO) located on the grounds of Berthoud High School. 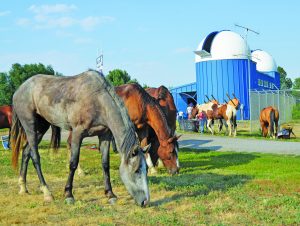 Photo by Amber McIver-Traywick – Horses used on the Lakota Ride 2018 take a much needed break outside of the Little Thompson Observatory in Berthoud.

The situation is dire for many of the residents of the Pine Ridge reservation, issues the Tipi Raisers hope to improve through their advocacy. US Census Bureau data shows almost 54 percent of Lakota people live below the poverty line (compared to the US average of 12.7 percent). Other sources take the number as high as 80 percent. One-third of homes on the reservation lack basic clean water and sewage, while 40 percent do not have electricity.

Ventimiglia wasn’t the only one with family members on the journey. This was also a family affair for 11-year-old Thomas Belt who was on the ride for the second year, along with his parents, sister and his cousin. Belt had been riding his sister’s blue-eyed horse Bandue for most of the day in the 100-degree heat as the group made their way into Berthoud. “Bandue – his heart is connected to mine and, like me and him, we have a connection. It’s pretty cool about riding him for this.” Belt’s family wanted to be a part of the full 400-mile ride, as the organization is raising funds to help build a home for them on the reservation.

The venue was packed with ride participants and LTO members who hosted the group for the evening. Members provided dinner and gave a presentation on the Lakota constellation wall at the observatory which was followed by Lakota songs, a story, and dances performed by residents of the reservation.

Most of the group’s stopping points are not planned ahead of time and, with more than a dozen horses and 25 people, this could be a difficult task, but Ventimiglia said despite previously being a bit jaded about our society that, “There is such incredible kindness that you come across in 400 miles. I was surprised by that. This ride has helped me understand that this country is in really great shape.” Berthoud residents provided a place to stay for all of the riders and horses that night after several community members reached out to find a suitable location. 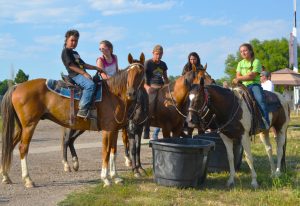 Photo by Amber McIver-Traywick – Riders give horses a drink as they arrive at the Little Thompson Observatory in Berthoud.

The fundraising aspect of this year’s ride will go to projects like building homes, remodeling and improving several homes throughout the reservation, providing firewood, clothing, gasoline, food, and necessary supplies throughout the year to families and to provide scholarships for Native American and non-Native American youth to visit each other’s communities and participate in programming through The Tipi Raisers.

America has had a complicated history with the indigenous people of North America, and the Lakota, which are one of seven bands of the Great Sioux Nation, are no exception. The Tipi Raiser’s website states, “Despite a history of genocide, broken treaties and extreme poverty, the legacy of the Lakota people is not rooted in their suffering; but rather in their strength, their wisdom, their traditions, and their ways.”

For more information about The Tipi Raisers, to inquire about volunteer opportunities, or to make a donation, visit thetipiraisers.org.