Infrastructure work is underway at PrairieStar development in north Berthoud 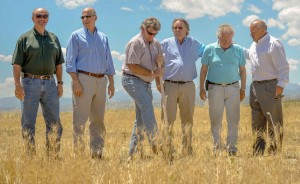 The long awaited PrairieStar development, located at the northeast corner of Larimer County Road (LCR) 17 and U.S. 287, is formally underway following a brief groundbreaking at the site on Monday afternoon. The ceremony ushered in the beginning of phase one of the development.

Zeiske stated Henry Walker Homes had agreed to build on 50 lots and Goldberg said Richfield Homes had committed to 69 lots. The total of 119 single family lots was absorbed by the two builders.

In addition Sarbaugh stated he and McCabe were preparing to make application to the town for approval of a 113 unit multi-family complex on a tract adjacent to LCR 17. The 113 unit complex, which would be owned by the developers and available for rent only, must still undergo a site plan review.

Sarbaugh added, by the end of 2015 the developers hoped to have a swimming pool, club house and community garden plots for amenities which would be available to the residents of phase one for an annual fee. These amenities would all be located on the tract with the multi-family units.

The first houses to be built will be a group of show homes at the northwestern corner of the property. 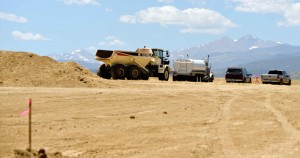 Streets, water and sewer lines must be in place before building can take place, but Sarbaugh expressed optimism that the infrastructure would be in place by the end of August and the first building permits could be issued for homes in the development sometime in August.

He also said the developers were still pursuing the solar farm concept. Sarbaugh said that he and McCabe hoped to build, in the next year to two, a half megawatt system that the phase one residents could subscribe to.

Goldberg mentioned there is currently an area-wide shortage of skilled and qualified building trade people in the region, but Sarbaugh stated he did not expect there to be a great enough problem to affect PrairieStar construction schedules.

With regard to the high cost of Colorado-Big Thompson water, Sarbaugh said the PrairieStar development was encouraging the wise use of water by implementing techniques to stretch the amount of water needed for each residential lot.