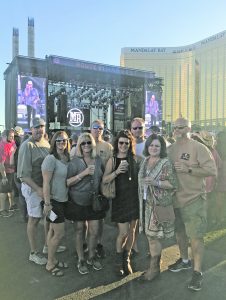 From left to right: Craig and Shannon Renke, Amy and Rob Brink, Cindy and Stacy Balman, Amy and Ray Wagner stand in front of the stage at the Route 91 Harvest Music Festival adjacent to Mandalay Bay Resort and Casino. Shannon was shot in the foot and calf during the Oct. 1 mass shooting that left 59 people dead and over 500 wounded.

For Craig and Shannon Renke, what should have been a fun, last-minute trip to Las Vegas turned into a living nightmare. The Renkes, along with three other couples, were unknowingly traveling from their homes in Colorado toward an encounter that would result in Shannon being shot and the rest of the group narrowly surviving the largest mass-shooting in recent U.S. history.

Shannon Renke, who recently retired from coaching gymnastics for 25 years and her husband Craig were Berthoud residents for many years while their daughter Bailie Holst was growing up. Bailie graduated from Berthoud High School in 2013 and received a full-ride scholarship for gymnastics to the University of Minnesota. After becoming empty nesters the Renkes moved to Frederick Colo.

The decision to attend the Route 91 Harvest country music festival in Las Vegas at the end of September was a fairly spontaneous one, “It was kind of a last-minute decision, there were three other couples that are friends of ours that were all going – my husband’s business trip got pushed back … so we thought why not.”

The Renkes along with friends Amy and Rob Brink, Cindy and Stacy Balman and Amy and Ray Wagner were all set to enjoy three days of some of their favorite country artists.

“The first two nights were honestly the best times we’ve ever had in Vegas,” Shannon commented, “It was kind of surreal because all of the country artists really took time to thank our servicemen and first responders and it was a very patriotic atmosphere, we couldn’t wait to get back the next day.”

On the third day of the event the group of friends found their way back to the same spot in the crowd of more than 20,000 people they had stood the previous days dancing, singing, laughing, and enjoying the music and each other’s company. “We were pretty much dead center of the stage and dead center of the arena.” Shannon said.

A little after 10 p.m. country singer Jason Aldean was on the stage just a few songs into his set when the group thought someone was setting fireworks off in the crowd about twenty feet in front of them. Shannon said, “My first response was anger because I thought what are people doing bringing fireworks to a concert.”

The popping sound stopped followed a few seconds later by another round. The Renkes began to feel concerned when they began to hear screams and saw a few people running away. Aldean was still on stage performing and Shannon said at that point “We still didn’t really know what was going on.”

When the third round began confusion turned to fear as there was now no question what the group was hearing, Shannon recalled “It was completely different … a deeper sound more like a machine gun type sound than the higher pop pop pop sound before,”

One bullet tore through the bottom of Shannon’s foot, exiting out of the side of her foot, the other she wouldn’t even realize until later had grazed her calf.

Not knowing where the bullets were being fired from and assuming the gunmen were walking through the crowd, the group decided at the next pause in the barrage to run.

Craig asked Shannon if she would be able to run to which she replied, “I’m running I don’t care if I can run, but I’m running.”

When the bullets briefly stopped flying the group sprinted toward an exit on the east side of the outdoor venue.

Shots rang out again as the group fell into a pile. Craig attempted to look around to see where the shots were coming from, “I could see the flashes (from Mandalay Bay) it felt like there were two guns firing … you can’t fathom  the amount of shots that were going off, the noises we were hearing around us, just bullets ricocheting everywhere,” he said.

Chaos was all around as concert goers ran in all directions. People ran under the stage, towards the back of the venue, out of the sides, over barriers, then the house lights were brought up. Shannon said, “I remember thinking to myself what are they doing, we’re sitting ducks out here, you just turned on every single light for these shooters … they know exactly where every single person is, we have to run.”

The couples jumped up and ran, losing each other in the panic stricken crowds with bullets continuing to rain down around them.

Craig and Shannon dove behind a police car as they exited the venue. Several other people tried to hide behind the same car, many of which had also been wounded. Shannon had lost her shoe and was bleeding. While crouched behind the car Craig took his shirt off wrapping Shannon’s foot with it as tightly as he could. “The cops said we weren’t secure and we needed to run so I thought if we’re committing to run I need to do something to help her,” he said.

“We kept running further and further away but it felt like the bullets were still with us so at some point I felt like they were chasing us or following us because I kept thinking in my mind how could it still be reaching us this far,” Shannon said.

The couple ran straight into a dead-end. Bullets still ricocheting around them, they were trapped. Craig told Shannon he could help her over the cinderblock wall but he wouldn’t be able to make it over. Shannon refused to leave him. A group running alongside the Renkes eventually forced their way through a locked gate attached to the wall opening a desperately needed way out. As the couple continued to run away Shannon looked over her shoulder and saw a woman get shot in the back.

Craig eventually left Shannon behind a metal utility box and went to try to find help. Several ambulances passed but were either full or told him they were only taking critical patients.

The couple decided to continue to run. They were soon stopped by a local man who told them the Hooter’s casino was taking in triage patients and that they should go there. This meant turning back around. Shannon said she was terrified to go back in the direction they had just come from but Craig kept telling her they had to do it to get her the help she needed.

They found their way to the Hooter’s Casino entering through a back entrance and stopped in a hallway with several other wounded people. “There were a couple of people who were off duty EMT’s and another guy who said he was a medic in the military helping people to calm down and just doing what they could,” Shannon said.

Around thirty minutes later firemen came down that hall to help the injured. One fireman asked Shannon if she could walk. She had now reached a point that walking was no longer possible. She recounted with a hint of humor that the fireman, ” … just picked me up and carried me running through the casino to the front doors.” There the couple was placed in an ambulance and taken to a hospital 20 minutes away in Henderson, Nev.

The whole Las Vegas area went into lockdown so Craig was forced to stay in the lobby while Shannon received medical attention. While Craig waited he said, “You watched everybody come in. You watched parents come in looking for their kids, you watched friends coming in in a panic, but the hospital was very calm and you’re just sitting there thankful you’re alive.” He kept himself busy communicating with their friends who didn’t know Shannon had been shot and keeping family up-to-date on the situation.

Following their own terrifying experiences, all of the Renke’s friends eventually made it back to New York-New York Hotel and Casino where the group had been staying. Shannon was released on Monday to seek further medical care back home.

The couples were all scheduled to leave Monday on separate flights but Southwest Airlines made sure they were able to fly together even giving Shannon a row to herself to be able to keep her injured foot elevated.

Shannon’s prognosis is good and an orthopedic specialist has confirmed there are no longer any bullet fragments inside of her wounds. She may still face surgery but is in the process of healing.

Healing is a process, both emotionally and physically and the group will undoubtedly experience both in time. Shannon explained that her wounds were left open to aid the healing process, “Now it’s just a matter of healing from the inside out.”

In the end 59 people were killed and more than 500 were injured during the massacre on the night of Sunday Oct. 1. The gunman, identified as 64-year-old Stephen Paddock of Mesquite, Nev., died of a self-inflicted gunshot wound at some point before police made their way in to the 32nd floor suite at the Mandalay Bay Resort and Casino where he carried out the attack. The motivation for the shooting is still unknown.