There is a new anonymous commentary app parents should be aware of available through the Apple App Store that is exploding in popularity, particularly among teens. Sarahah is described as being an application that “helps you in discovering your strengths and areas for improvement.” Users set up an account and then are able to send a link out and receive anonymous comments and critiques from co-workers, friends and acquaintances. The app’s developer, Zain al-Abidin Tawfiq, a citizen of Saudi Arabia, built the app so workers could give vent to frustrations and anonymous feedback in the workplace without fear of retribution from their bosses. However, as constructive as that could be, anyone who has ever read the comment section on many websites knows anonymity comes with a hefty price tag in the digital world. 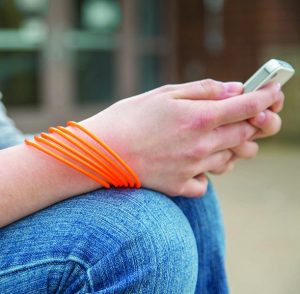 The app arrived in the U.S. in June and is currently number-one in the app store’s free apps list, ahead of giants like YouTube, Facebook and Instagram. Many teens and adults have already experienced the good and bad sides of the application.

Brett Merritt, 26, a cinema manager heard about the app through Facebook, with no professional development applications in mind; he simply wanted to try it out for fun. “I thought people would maybe leave quirky over-the-top stuff… I solely wanted just goofy inside jokes and stuff back,” he said. Merritt commented that in the short time he’s been on the app the feedback has been mixed. “I did get some goofy inside jokes, but I also had someone request I go commit suicide.”

In the not-so-distant past, several apps and websites that allowed users to comment about others anonymously, like the college crowd targeted, and now defunct Yik Yak app, were heavily used to feed the growing trend of cyberbullying. In 2015 Yik Yak was even involved in a criminal investigation at Western Washington University due to hate-speech. This led many schools to ban the apps use, but, where one left off another appears to be taking its place.

Unfortunately these types of interactions are all too common, particularly when those responding can hide behind anonymity.

One teen reviewer in the app store said after using the app for only two days, “I got three messages and they were all bad ones….this app is just one of those apps that make popular people seem way better than everyone else.” Another said, “I had the app for less than an hour and received nothing but hateful, hurtful messages from people I thought were my friends.”

Lauren Walker, 34, a qualified developmental-disabilities professional, and mom of one, also downloaded the app for fun. “I thought it could be interesting or fun to see what others would say about me anonymously.” Walker’s feedback has been positive so far, with one respondent even saying, “You’re an all-around awesome human being.” When asked if she would allow her daughter to use a similar app when she reaches her teen years she commented if she had a history of bullying others or being bullied herself, that, “… the potential risks of Sarahah outweigh the benefits.”

The fact that cyberbullying victims, according to a study done by the Cyberbullying Research Center, are more than twice as likely to have attempted suicide compared to youth who had not experienced being bullied online, may encourage parents to help their teens avoid apps like these that allow users to comment without consequence. Experts recommend parents talk to their kids about the risks of apps and social media and closely monitor what they are viewing and who they are in contact with on all platforms.