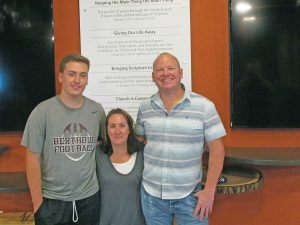 It is ironic that Hollis Hunt works at Berthoud’s Grace Place Church. His first encounter there — some 12 years ago — was not that great.

As Hunt and his wife Rae tell about it, the family stopped by the café at Grace Place for the first time a dozen years ago on Father’s Day. The Hunt family did not know the eatery was connected to a church. This changed when they saw Pastor Clay Peck’s image appear on the television screen in the room.

When Hunt realized where he was, he and the family walked out of the building. The incident did lead Hollis and Rae to have a conversation about taking their five children to church. “This meant that Rae would take them,” Hollis joked.

Rae and the kids started attending services at Grace Place. One Sunday Rae came home and related a joke told by Peck at the service that Sunday. “A pastor told a joke?” was Hollis’ reply. At the time Hollis said he felt that Christian and pastors were not what he called “normal.” The silly joke about a hunter and a bear changed Hollis’ mind. Subsequently, he started coming to church with the family. “I said yes to Jesus on Sept. 4, 2008,” Hollis proclaims proudly.

The story of how Hollis and Rae met is also interesting. Rae has worked for a high-tech laser optics company in Lafayette. Her tenure there is more than 28 years. Many years ago, Rae’s boss was Hollis’ mother. Rae visited her boss at home. Hollis was there — with his then girlfriend. Circumstances changed, and Hollis and Rae started dating. As the old saying goes, “The rest is history.” The couple have been married for 18 years.

Hollis grew up in Mead and Longmont, leaving for a time to serve in the Navy. He worked in construction for 21 years. The downturn in 2008 caught up with him the following year. He says he “lost everything,” at that time. “It’s actually the best thing that ever happened to me,” Hollis said.

The job loss did make Hollis feel as though he lost his identity. He tried a couple of jobs but wanted to do something he was passionate about.

Hollis decided this passion was cooking. Rae says after Hollis lost his construction job he was the cook at home, since she was working.

Hollis found out through a friend that Jamie and Tiffany Degnan were starting Origin’s Catering.

He interviewed with Tiffany. Hollis told Tiffany he would start working for free. She liked what she saw and hired him to assist with the starting of the catering business.

At the time, Tiffany was managing the café at Grace Place. It went by the name The Lighthouse then. Hollis rose to the role of assistant manager and then took over as manager of the restaurant when Tiffany left to do catering full-time.

Now, Hollis does his cooking at home. “Rae and I have fun cooking together,” he said.

Six years ago Hollis decided he needed more in his life. He says God was telling him to become a pastor. “God said the pastoral track was the way to go,” remembers Hollis. Hollis says he fought the idea for six months. He asked then Grace Place pastor, Steve Kurtwright, for advice. Kurtwright was overjoyed, according to Hollis, and assisted in the change. Hollis was on his way to becoming a pastor. Two years ago this past June, Hollis was ordained at Grace Place.

“God put me at the feet of giants,” Hollis says about his experience. He credits Peck and Kurtwright for guiding him, along with missionary Torrey Brinkley.

Hollis is settled into his new role as a pastor. He still oversees the café where he got his start a few years ago. He still loves the outreach the Trailhead Café does locally and beyond, at its new location west of Berthoud.

Hollis also helped with the transition from the old church location to their new spot. “It was a privilege to help design the new church,” Hollis said.

Being a fairly new pastor, and for that matter a relatively new churchgoer, is an adjustment to Hollis, Rae and their son Cody, who will be a sophomore at Berthoud High School.

“Heh as adjusted better than I have,” says Rae with a smile. “He knows everyone in town,” she lamented, speaking of her husband. She relates how going to the grocery store should take five minutes but ends up being longer as Hollis talks to all the people he knows.

The supportive Rae says she is still trying to figure out how to be a pastor’s wife. Son Cody is learning his role too. His main focus right now is going back to school. Cody looks forward to the upcoming football practices and season.