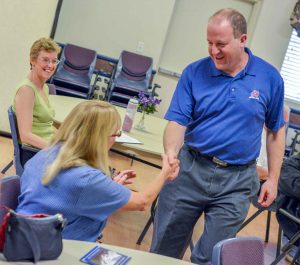 About 20 people attended a town hall meeting at the Berthoud Community Center Aug. 27 with U.S. Representative Jared Polis (D-Colo.). Immigration and the controversial process of natural gas hydraulic fracturing, known as “fracking,” were the two topics of discussion. However, the majority of the conversation revolved around immigration with several residents in attendance voicing concerns for the on-going crisis at the U.S.-Mexico border and Congress’ inability to pass comprehensive immigration reform.

The Berthoud meeting was the tail end of the roughly dozen town-hall meetings on this tour. Polis said those are the two subjects mostly requested by people attending the meetings. However, he added, that the Middle East, ISIS, the situation in Ukraine and Russia, and health care have all been discussion topics at several of the meetings.

“And this was no exception,” Polis said. “It was mostly immigration, of course, and a little bit of fracking.”

“It’s not going to be everything that everybody wants,” he said. “The case we’re making is that it’s much better than not addressing the problem and not solving anything.”

By not addressing immigration, more and more people will continue to come here illegally if Congress doesn’t do something, Polis told the crowd.

The Senate approved an immigration bill in 2013. That bill would devote $40 billion to secure additional border enforcement including 20,000 border patrol agents and 700 miles of fencing along the southern border over the next decade, the New York Times reported in June 2013. The bill also provides a 13-year path to citizenship for the nearly 11 million illegal immigrants currently living in the U.S.

House Speaker John Boehner (R-Ohio) opposes the legislation and the House has yet to vote on it.

One man in attendance told Polis that he believed the government’s immigration policies don’t work and that they never have.

“Again, the folks here are frustrated by the status quo,” Polis said after the event. “We heard that. So once people understand that the status quo is guaranteed to continue unless we can get together behind a bipartisan solution, then I think the country will cry out for it.”

“It takes resources to secure the boarder,” Polis said. “It’s not a lack of will.”

“That’s not going to do it,” Polis said.

The congressman detailed the $40 billion plan aimed at securing the southern border, but said that getting legislation through Congress is the big hurdle.

“Congress can avoid solving it, but hopefully the American people will demand a solution,” he added.

The federal government estimates that there are about 11 million illegal immigrants in the country currently. The $40 billion package is the border security piece of reform, Polis said. He clarified that it’s not solely intended on keeping people from illegally entering the country, but it’s also intended to make commerce and trading for the two countries more efficient.

“Mexico is one of our top three trading partners with our country,” he said. “There is a lot of import and export trade with Mexico.”

Regarding security, “with walls you need doors,” he said, and that takes money. Measures would be implemented at the boarder to catch more contraband and allow legitimate goods to cross more quickly and efficiently. Other key pieces of the package, including a path to citizenship and workplace authentication, were reasons Polis gave for his support of the bill.

“That’s why I’ve been supportive of the plan that’s on the table that would address this with more boarder security, work-place authentication and the other elements we’ve talked about,” Polis said.

Richard Brown of Loveland attended the meeting and expressed his concerns with the administration’s ability to enact real immigration reform.

Only one person, a Weld County resident, brought up fracking to the congressman, but the conversation quickly returned to immigration. However, Polis did take an opportunity to lay out his support for homeowner’s rights in regards to natural gas drilling.

“I’m largely focused on helping to give homeowners more rights about determining what’s happening near them or in their vicinity in helping to support the community’s ability to make those decisions; whatever they are, wherever they are,” he said.