“Let’s make sure we understand the facts before we say all these feel-good things,” Yu said in an hour-long sit-down with The Surveyor. That is the overarching message of the 46-year-old businessman’s campaign. 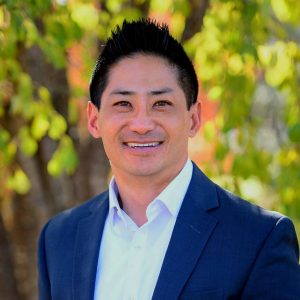 The first of his family to be born in the United States, Yu explained he has been through it all, the highest of highs, the lowest of lows and everything in between. The youngest of seven children, Yu spent the vast majority of his youth working in his parent’s restaurant. After school and football practice at Thompson Valley High School in Loveland, Yu would do everything from wash dishes to wait tables.

Both parents and all seven children worked in the restaurant because, in Yu’s words, “That’s all we could afford,” and the experience instilled in Yu and his siblings an unrivaled work ethic and pride in self-reliance. Despite living in poverty, Yu said his family never took government assistance and yet worked for, and eventually achieved, the American Dream.

Yu brings that mindset to the campaign and says it is how he will approach things as a U.S. Congressman should he win the election over Democrat Joe Neguse in the November’s elections. “The reason why I am running is I’m tired of people trying to tell us what we need … I don’t want some career politician that has done nothing but government work, I want someone in office who knows exactly what I’ve gone through,” he said.

As Yu explained, “We all want the same thing, whether you’re a Democrat or a Republican, we all want the same thing. We all want to be happy. We all want to be able to go to the doctor when we get sick. We want everyone to get a job, to be prosperous, to put food on the table and take care of your family. There are just two different ideologies of how we do that. One ideology is, ‘you know what, we believe the government has a very big role in accomplishing that,’ the other side believes we should be able to govern ourselves, we decide what we want in life.”

Yu’s passionate opposition to the Medicare-for-all universal healthcare proposal championed by Neguse and other Democrats has been a point of emphasis throughout the campaign. Yu said he asks the simple question, “With a 21.3 trillion-dollar national debt and headed toward $100 trillion, how are you going to pay for this and what are the details of this plan?”

“I am absolutely against Medicare-for-all and, because I’m a facts guy, a numbers guy, I can tell you the math does not work. If someone says it does then their calculator is broken,” Yu said. “The estimates and reports came out from George Mason University that universal healthcare, Medicare-for-all, will cost a minimum of $3.2 trillion per year. Our current tax revenue right now is only $3.4 trillion. We’re going to use all of our budget for one program,” Yu said as he went on to explain programs such as Health Savings Accounts, increasing competition in the insurance market by reducing mandates, creating more medical co-ops, enacting medical malpractice reform and fighting the drug and obesity problems that plague predominately lower-income Americans are better, cheaper and more effective ways to provide greater access to healthcare than enacting another gigantic government program.

For Yu, his concerns around the Medicare-for-all plans are not about their intent – he is adamant he wants everyone to have access to affordable, high-quality healthcare – but rather the price tag and the inefficiencies created when the government gets heavily involved in the marketplace.

“Here’s the funny thing about government, Can you name me one government entity that is well-run or efficiently-run, so why would you want them to run your healthcare,” Yu asked rhetorically. Yu points to other advanced countries which currently do have nationalized healthcare systems and explained that to pay for such programs in the United States, with a population of nearly 330 million, taxes will have to be increased to what he calls extreme levels.

Yu further explained the proposal of raising taxes on a wealthy, something he said commonly gets mentioned as a way to pay for a universal healthcare plan, will not get close to covering the costs, saying the numbers don’t add up. Referring to himself as a “facts and numbers guy,” Yu drew two examples.

“According to Forbes magazine and you took the 400 richest people in America and you took all their money, their houses, their bank accounts, their businesses, everything, that would only be $2.7 trillion. The federal budget right now is $4.5 trillion. And, if you taxed every person in America who makes $1 million dollars or more at 100-percent, that would only reap between $600 and $700 billion,” he said.

Yu also expressed concern over the ballooning national debt, saying it cannot continue to grow un-checked without disastrous consequences. “The elephant in the room, the one no one talks about, is the national debt. We have a $21.3 trillion debt,” Yu said. “The Congressional Budget Office came out with a report … in 30 years our country will be at $100 to $130 trillion in debt, even if we don’t add a single other government program. How does no one care about that? That will put us at 200-percent debt to GDP.”

The Cook Partisan Voting Index rates the second congressional district as favoring the Democrats by nine percentage points. As the underdog in the race, Yu explained, “I am here to make sure you understand the facts, because I honestly believe if you understand the facts, because facts do not lie, and if you know them then you will be able to make the best decision on the way to go.”

He continued, “I have no problem with my opponent, he is a very, very nice guy … but I’m not here to be a lifetime politician, Joe (Neguse) is, and he’s already stated that too. This (race) is just a stepping stone for him.”

Further information on Yu’s campaign can be found at www.peteryuforcongress.com.