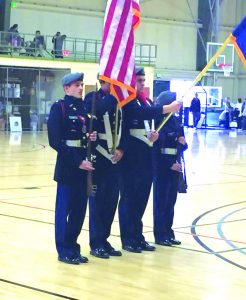 “We’ve got a very young team,” said Harold Johnson, Ret. Sgt. Major and ROTC instructor at Berthoud High School (BHS). “We had one goal, to get experience and see what competition is like.”

Forty Junior ROTC students from Loveland, Mountain View and Thompson Valley high schools competed in the precision drill meet. BHS did not attend, because the 22 students who are in Junior ROTC did not select to be part of drill. The next drill meet will be Feb. 17 at Loveland High School.

“They did great. They were focused, and they finished middle of the road,” Johnson said.

The Junior ROTC program at BHS competed in raiders and marksmanship. Raiders is a multi-component team competition that involves a 10K race, timed exercises, scaling a wall, and agility and obstacle courses. Markmanship is a three-position, 10-meter air-rifle competition involving standing, kneeling and being prone to shoot an air rifle from a distance of 10 meters.

“In ROTC, we learn discipline and being accountable for everything,” Heavilin said, adding she also has learned communication and leadership skills. “It helps me get practice and more confident in talking with people.”

BHS offers Junior ROTC as a class students can take in grades 9-12. The classes include an introduction to the military for civics and physical education credits for ninth graders; national and international geography and emergency First Aid for 10th graders; service learning and global awareness for 11th graders; and college preparation and career development for 12th graders.

“Those kids who stay three or four years, they get a boost in rank and, depending on their service, will get a one- or two-grade pay grade,” Johnson said.

The district typically participates in six events a year.

“They get regular assignments in class, and then they compete,” Johnson said.
“We either practice in the early morning or after school.”

The mission of Junior ROTC is to motivate young people into becoming better citizens.  He pointed out discipline and personal respect for one another as particularly important.

“I think it fills in the gap with a lot of things that this generation has missed out on,” Johnson said.