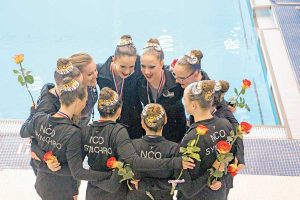 “It was really awesome,” said 14-year-old Birdsall. “All my teammates couldn’t stop crying because we couldn’t believe what just happened.”

What had just occurred was a pretty amazing thing according to Orca’s head coach, Audrey McMahon.

“It’s been a whole year of planning and so much training and strategy coming together,” McMahon said. “For it all to come together is rewarding for the kids, coaches and parents.”

The Orcas’ 16-17-age group team’s second place overall finish resulted after the team took first place in the team routine with a score of 69.33. Second place Tonawanda Aquettes from Tonawanda, N.Y., finished narrowly 0.36 points behind the Orcas in the team routine with a score of 68.96. However, the Aquettes’ averaged figures scores, where each individual swimmer is scored on four different maneuvers, which make up half of the overall score, put the Aquettes ahead of the Orcas by 1.04 points: 129.31 to 128.27, according to results from Teamusa.org.

Birdsall was the Orcas’ top figures finisher with a score of 62.79 and good enough to tie for 19th place out of 177 competitors. It was a great way to end her sixth season on the team.

“We knew we would do well but didn’t really know what the competition would look like. So we trained as hard as we could to do as well as we could,” Birdsall said.

In the three previous years they’ve competed at the national level the team has improved each year. When McMahon started as an assistant coach three years earlier, the team wasn’t even qualifying for the event. A lot has changed in three years.

“This means the world to me, and I’m so proud of them and am proud to be a part of it,” McMahon said.

The Orcas team had never made it to the finals at a national competition before this year, let alone make the podium. In 2012 the team missed qualifying for nationals. In 2013, McMahon’s first year with the team as an assistant coach, the Orcas placed eighth in the zones competition that qualified them for nationals where the team finished in 27th place. The following year (2014), the Orcas placed fourth at zones and 13th at nationals.

Starting this season in the fall of 2014, the team’s goal was to make the top 12 teams in the preliminaries just to qualify to compete in the finals.

“It kind of evolved through the season,” McMahon said. “We started off the season with the goal of making the finals; we were just shy of that last year. So that was the goal this year.”

This year McMahon said she expected the team could make it into the top five at the Junior Olympics, but admitted even she was surprised when the team finished in second place in the preliminary team routine.

“I expected being top five, but I did not expect to medal,” McMahon said. “It was super exciting.”

And motivated the girls to keep pushing through the next couple of days, she said. 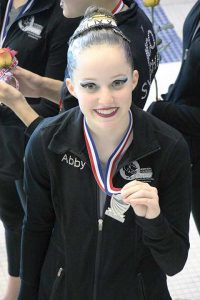 “In the past years, going to the big meets, our team was pretty intimidated by the other teams,” Birdsall said. “But going into this year’s Junior Olympics meet, looking at the competition, we weren’t as intimidated as much as in the past.”

This particular group of girls included swimmers from Loveland, Windsor, Fort Collins, Longmont and Milliken. Swimmers on the 16-17-age team includes: Birdsall, Charlotte Dougherty, Mariah Anton, Cleo Anderson, Emily Holt, Kate Molenaar, Anya Wiens, Livi Reintsma and Ella Reintsma. According to McMahon, the majority of the girls are freshmen in high school and have four more years of competition, which puts the bar high for future seasons. But McMahon and Birdsall expect big things for the Orcas.

“My hope would be to place first next year,” Birdsall said. “You don’t know what the competition will look like; it may be a little different. But at least we’ll have the experience.”

It’s an experience that the Orcas’ coaches and swimmers will remember for a lifetime; even if it’s still setting in.

“It really hasn’t sunk in all the way still,” Birdsall said. “It’s a pretty big deal.”