Kelli Marie Peterson passed away on Nov. 10, 2022, at the age of 47 from complications related to Multiple Sclerosis (MS).

She was born April 11, 1975, in Longmont Colo, and moved to Berthoud at the age of one. She graduated from Berthoud High School in 1993. After high school, she played basketball at Western Nebraska Community College in Scottsbluff, Neb., for two years. She graduated from Colorado State University (CSU), and then went on to pharmacy school at Colorado University (CU). Kelli continued to be a pharmacist until a few months before her death. 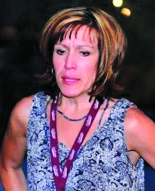 One of Kelli’s favorite hobbies was spending time in her amazing and beautiful garden. Kelli also enjoyed exercising, her favorites being going for bike rides and swimming. Kelli enjoyed going on family trips and spending time with her parents and brother’s family. Kelli was also known for her cooking which was enjoyed by her family and friends. She especially enjoyed going to Drew’s Knowledge Bowl and watching Axel play basketball.

Kelli is survived by her parents Donald and Laura Schultz of Berthoud, Colo., her husband Micheal and her two sons Drew and Axel, as well as her brother Colby Schultz and wife Kaylyn, her niece Alexandra and nephew Austin Schultz. She also has a large extended family that includes many nieces, nephews and cousins.

Kelli was inducted into the Berthoud Sports Hall of Fame that eulogized Kelli on their website – “Kelli was part of the inaugural class of the Berthoud Sports Hall of Fame and, was overwhelmed by the honor, yet the honor was all ours. Kelli was an amazing athlete during her time in Berthoud, helping lead the Lady Spartans basketball squad to back-to-back state championships in 1992 and 1993. She did not stop there and remained deeply involved and connected to the Berthoud community in the decades that followed. Her incredible success as an athlete was only eclipsed by her dedication to community and, most especially, as a wife, mother, daughter and sister. We love you, Kelli, we will miss you and we will never, ever forget the impact you made on all of our lives. May you rest in peace.”

A service has held Thursday, Nov. 17.