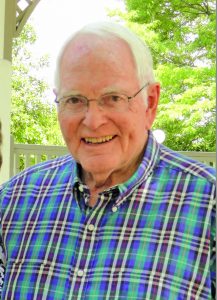 Alan Turner Townsend, age 85, departed this earth and stepped into the arms of Jesus on December 20, 2020.  Born in San Angelo, Texas, in 1935, he spent his formative years at Abilene Christian University and in the Air Force. Alan was stationed first in Biloxi, Mississippi and then in Lincoln, Nebraska, where he met the love of his life, Sharon Sterner.  They married in 1959 and a few years later moved to Berthoud with their two young daughters, Anita and Annette. Alan quickly established himself in the community, first as a teacher at Berthoud High School and then as an engineer for Hewlett Packard in Loveland.  He was a member of the Loveland Church of Christ, serving as a deacon, elder, and bible teacher for more than forty years.  Alan never met a stranger and never lost a friend.  A jack of all trades, he spent countless hours expanding and remodeling the family home and volunteering at his church and in his community. In fact, seven years after retiring from Hewlett Packard in 2000, Alan answered the call to teach a new generation of students at Mountain States Children’s Home in Longmont.

A devoted husband, loving father, and doting grandfather, Alan leaves behind his wife of sixty-one years, Sharon Townsend; his daughters Anita Kritz and her husband Bill, and Annette Matthews and her husband Mike; his grandchildren Michael Kritz (wife Chelsea and son Zane), Taryn Kritz, Kayla Matthews (husband Chris and children Emma, Avery, Aiden, and Kennedy), and Kyle Matthews (wife Ashley and children Isaac and Hope); and his brother Jimmy Don Townsend. He was preceded in death by his parents, Aubrey and Violet Townsend, brothers John Townsend and Curtis Townsend, and his father-in-law and mother-in-law, Trueman and Rose Sterner.

Alan loved God, loved his family, and loved his neighbor. He fought the good fight. He pressed on toward the goal. He finished the race and heard the words “Well done, good and faithful servant.” It has been said that a life well lived is a funeral well preached. Knowing that to be true, the family will forego a public funeral and instead hold a private memorial to honor Alan at a favorite mountain getaway.   For those wishing to honor Alan in a tangible way, you may do so by making a gift in his name to Mountain States Children’s Home, 14780 N. 107th Street, Longmont, CO 80504.