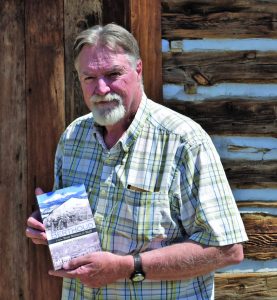 Photo by Katie Harris – Mark French’s book “Berthoud from River Bottom to Bluff” is available for purchase at the Little Thompson Valley Pioneer Museum. French is a regular columnist with the Surveyor and his weekly column, Tales of the Little Thompson, is widely read by Surveyor readers.

Have you ever wondered where Berthoud got its name, what year the town’s first baseball team was established, or how many students attended Berthoud’s first school? If so, then fourth generation Berthoudite Mark French’s newly released book, “Berthoud from River Bottom to Bluff” should be on your must-read list.

French, who taught high school English in Lyons, CO for 30 years and has served as president of the Berthoud Historical Society for the past 19 years, said his interest in Berthoud’s past was piqued when he was just a boy.

In “Berthoud from River Bottom to Bluff” French addresses that very question, uncovering the mystery of Berthoud’s first homesteaders and the settlement that existed at the Little Thompson river bottom one mile south of today’s downtown for a dozen years before being loaded up and carted away to the new “bluff” location.

While French officially began working on his book five years ago, his research started long before that. In fact, an online search into nearly any aspect of Berthoud’s history will turn up one of the hundreds of articles French has written for the “Berthoud Weekly Surveyor” over the years.

“When I’d go into one of the old newspapers to do research I might plan on spending five minutes on a subject and end up spending three hours looking through other things,” said French. “Over the years I’ve just accumulated notes. It wasn’t until about five years ago that I finally felt I had enough to write the book.”

French’s first book covers the earliest history of the town, including a brief introduction to the Native American tribes that first inhabited the valley, and the trappers and traders that passed through the area in the mid 1800s, giving it the early name “Little Thompson Valley.” The book goes into more detail as it introduces Berthoud’s first homesteaders in the 1860s and 70s, and follows the young town through the end of the 19th Century.

“The focus of the book is the really early history of the valley,” said French. “There aren’t a lot of photographs that exist from that time, so it’s taken me a long time to get started on it while I’ve waited on photos and information. There’s not one go-to source for so far back; I had to pull from probably a dozen different sources to get the whole story, which made it time consuming.”

French said his one regret was never tracking down a photo of the original settlement, later known as “Old Berthoud,” which would date back to the early 1880s. While he hoped to come across one before the book was published, the Berthoud native and historian still holds out hope that he might someday stumble upon the rare find.

For the more than 100 photos French did include in his book, he primarily utilized History Colorado’s website, historycolorado.org. The site contains digital copies of local papers from the 1800s including “Fort Collins Weekly Courier” and Loveland and Cheyenne, WY newspapers which occasionally covered the Berthoud area at the time. 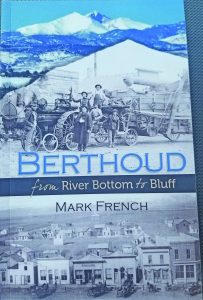 Although he doesn’t currently have a second book in the works, French said this likely won’t be the last we’ll see of him as an author.

“I have a couple writing projects in the germination stage, but I definitely plan to do another book or two,” he said. “Writing this book has helped me visualize how the next books will be organized.”

“Berthoud from River Bottom to Bluff” was officially released on Amazon.com two weeks ago, and is available for purchase at the Little Thompson Valley Pioneer Museum at 224 Mountain Ave. All sales revenue will be donated to endow the self-funded Berthoud Historical Society, which operates the Pioneer Museum as well as the McCarty-Fickel Home Museum.