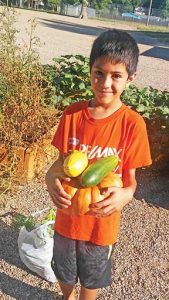 Students at Ivy Stockwell reaped the benefits of growing their own food this season, thanks to the school-sponsored Ivy Cares Club. The club, which is in its second year, provides various service projects to the school and community. Participation is open to all students attending Ivy and is completely voluntary.

“One of our first projects last year was making cards for senior citizens,” said Dorothy Fuller, faculty assistant at Ivy and creator of the Ivy Cares Club. “This year we have an upcoming project involving Veteran’s Day, and we’ll be making treats for teachers during appreciation week.”

“It’s their club,” she said. “We’re just facilitating it.”

Easily the largest project the Ivy Cares Club has put together so far is the garden behind the school.

“Since we are a STEM school, the idea to put in a garden fit with our school focus,” said Fuller. “The kids can be involved every step of the way, from designing to cultivating.”

After receiving a $500 grant from the district to build four raised beds, and with the help of a Johnstown Eagle Scout who built six more, the club was ready to begin growing last spring.

“Kids and their families got to choose one day a week to come tend the garden, and in return they got fresh produce to take home,” said Fuller.

Sydney Wolf, an Ivy Stockwell third grader, said the first step was to get their hands dirty. 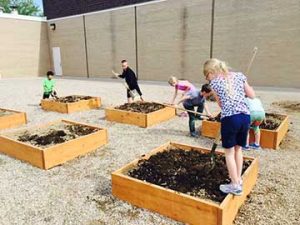 “The old dirt was all dry so we had to take it out and put in new, fresh dirt with shovels,” she said.

Wolf said they planted seeds in empty milk cartons with holes in the bottom and put them under lights in the school last spring before school got out.

“The beans and lettuce got big really fast.” she said. Once the seedlings were big enough, Wolf said they were taken out to the garden for planting.

The biggest job over the summer was watering, according to Jack DeSousa, another Ivy third grader.

“My mom and dad brought me to the garden every Saturday to water and pick vegetables,” he said. “We brought the vegetables home, and I got to help make recipes, like squash and zucchini salad.”

Another highlight for DeSousa was discovering he liked beets, after picking his own homegrown batch from the Ivy garden.

DeSousa wasn’t the only one who discovered a newfound taste for produce. Fourth-grader Olivia Anderson said her grandma made shredded pickles out of the cucumbers they harvested.

“They were so yummy!” she said.

Third-grader Mia Helden said her mom seasoned zucchini with oil and paprika, a new favorite dish for the budding gardener.

The group agreed the “giant” watermelons they grew were a definite favorite for all, along with the pumpkins that are still growing out back.

Only first-grader Stella Neiswander disagreed, saying her favorite were the peas.

“I took some peas home from the garden and I tried them for the first time,” she said. “They were sweeter than I expected.”

The youngest in the group, Neiswander has some big dreams for the future of the Ivy garden.

Neiswander also said it would be nice to carve some of the pumpkins and place them around school secretary Tammy Wildin’s office closer to Halloween, so everyone could see them when they walked in.

Anderson said she hopes future plans for the garden include an apple tree, with extra sweet apples, and a barrel to throw all the produce into that is ripe throughout the week, so everyone can more easily enjoy it.

“My main job when I’m at recess is watching the garden to make sure no one goes over and wrecks it,” she said.

With school back in session, many of the club members are spending early mornings watering and tending to the garden before the first bell rings. Anderson said she’s started arriving at 7 a.m. to water.

“Watering correctly is really important,” she said. “If the garden is really dry you have to stick the hose in and overwater it so that the middle gets some too.”

Students in the before-and-after-school program, “Champions,” also have the opportunity to help with the garden and collect produce during their time there, as does any student in the school.

“The kids see the garden outside the cafeteria door each day, and during recess,” said Fuller. “They learn about how to tell when something is ripe and ready to pick. During lunch recess they can ask a staff member if they’d like to pick something to take home.”

Fuller said the busiest time for the garden is after school and on the weekends, when Ivy families can stop by and harvest.

“It’s a great way to give back to the community, and it’s a hands-on way for the kids to learn,” she said.

Principal Rick Bowles, who recently spent time in the garden, picking peppers with the kids, said he’s proud of the work Fuller and the kids have done with it.

“I water a little bit but mostly I just support the staff in their great ideas and the things they want to take on,” he said.

According to Fuller, the Ivy Cares Club currently has 12 members and is hoping to recruit more students and families in the upcoming weeks.

“We are always looking at ways to improve the garden and would like to do some landscaping,” said Fuller. “If there’s anyone in the community that would like to help with that we’d appreciate it.”