Berthoud Drug has been a staple in the community for decades, and for the past 18 years owners Karl and Karen Foreman have been the familiar friendly faces running it. As a well-loved season of life comes to an end for Karl and Karen, a new season and opportunity to take the reins of the pharmacy and gift shop goes to Berthoud residents Joshua and Amanda Jones. 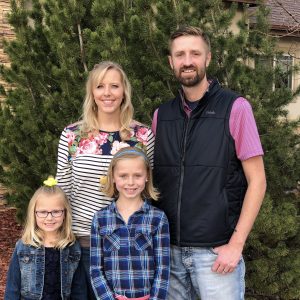 Courtesy photo – The new owners of Berthoud Drug, Amanda and Joshua Jones along with their daughters Kinley (5) and Addison (8). The couple took ownership of the pharmacy on Jan. 1 after buying the business from Karl and Karen Foreman. Karl is retiring after owning Berthoud Drug for 18 years and working more than 40 years as a pharmacist.

In the summer of 2000, Karl and Karen moved their family from Dallas, Texas, to Berthoud. “We had visited Berthoud and wanted to go to a small town. We wanted to land in a small town and wanted to escape the hustle bustle of Dallas,” Karen said recently while discussing the transition.

Prior to heading to Berthoud, Karl graduated from Oklahoma University with a degree in pharmacy in 1975. He practiced pharmacy in Dallas, Texas, for 25 years.

After almost two decades of serving the Berthoud community, and working with almost 6000 patients, Karl decided last year he was ready for retirement. “Getting to know my patients and their families has been the most rewarding part of this chapter for me. While I’ll miss seeing the folks that have made my time here special, it’s the right time to announce my retirement – and I’m excited for what’s next,” said Karl. “I was fortunate to meet Josh, and trust his wealth of experience and expertise will be a great fit for Berthoud.”

In early 2018 Karl and Karen began conversations with Joshua and Amanda, who became Berthoud Drug’s new owners as of Jan. 1, 2019. When asked how the relationship began Amanda said, “Independent pharmacy is kind of a small world, so they kind of stick together. I think how we initially started talking, we said hey, there’s another independent pharmacy here. We came in, we met Karl, and we developed a little bit of relationship.”

Joshua graduated with his Doctorate of Pharmacy in 2007 from St. Louis College of Pharmacy. He and Amanda have played a role in starting several other pharmacies in Missouri. The Jones family moved from Springfield, Mo., to Berthoud in May of 2017 with their two girls, Kinley (5) and Addison (8). The couple purchased a pharmacy in Loveland called Columbine Drug, which they continue to own and operate. Similar to the Foremans, the Jones were looking for a small town to call home. “My husband and I grew up in rural Missouri, a small town of 5000 people, so looking around here, Loveland was a little big for us. My husband grew up on a cattle farm which his family still owns, so that drew us here,” Amanda said.

Also like the Foremans, who worked as a team, Karl behind the counter working as a pharmacist and Karen running the gift store in the front, the Jones will be doing the same. Amanda is an accountant and has filled that role for their other businesses and will continue Karen’s work of managing the gift store, she said. “Joshua jokes he counts everything up to 30 and I handle everything above 30,” as pharmacists have extensive experience counting out 30 pills at a time.

Although many customers will be sad to see the Foremans go, Karl and Karen will be enjoying their new flexible schedules by visiting family across the county. They also have scuba diving plans in Florida as well as a trip to Israel lined up for later this year. “I was happy that Josh and Amanda reached out to me. I think it’s a great fit for my friends slash customers,” Karl said.  And customers will be happy to know, Karl won’t be permanently gone from the pharmacy, as he will rotate as a relief pharmacist for the time being.

The Jones plan on keeping things very much the same as when the Foremans owned the pharmacy, including keeping the name Berthoud Drug, “We aren’t trying to replace Karl by any means. He’s passing the torch and we are continuing the history of it,” Amanda said.

Berthoud Drug will continue to be a Good Neighbor Pharmacy® committed to offering quality products, competitive pricing to chain stores, and the personalized customer service Berthoud Drug has become known for over the years.