J.O.S.H. program offers a place for local youth to belong 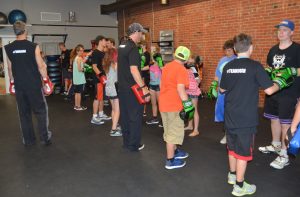 J.O.S.H. participants use boxing to gain strength and alleviate stress during a Wednesday Night Workout.

There is a circle of 25 young people ranging in age from 11 to 17, seated in an open fitness room at the Berthoud Athletic Club (BAC) on a Wednesday night. They’re getting ready to work out. It’s an eclectic group of kids reflected back in the mirrors along the wall. There are preteen girls with brightly colored bows in their hair and neon tank tops sitting across from teenaged boys wearing all black.  One of the group’s founders, Scott Crossen, an athletically-built man with a stern demeanor, who now teaches boxing at BAC after making a career competing professionally in martial arts and boxing, asks the group a question, “How many of you feel like you’re a warrior?” Many raise their hands with confidence immediately after being asked, a few do not. The leadership of the group, some just teens themselves, as well as the adult leaders, want to see every hand and head held high as a result of a journey they are on with each of the participants.

The organization is called J.O.S.H., an acronym for Journey of Strength and Hope, a nonprofit formed by concerned community members who wanted to make a change in the lives of middle and high school students after tragedy struck Berthoud last year.

The leaders and several kids at the ‘Wednesday Night Workout’ are wearing t-shirts with the J.O.S.H. logo which features a Phoenix, a mythical winged creature that gained new life through rising from the ashes of its former life. The symbolism is appropriate as JOSH began as a direct result of founding member JJ Francis’ son Joshua taking his own life on November 3, 2016. He was 15-years- old.

“This has been developed out of a need, I really believe this is meant to be – This program means we are being proactive with the youth in our community rather than being reactive when it’s too late– we’re doing something for our youth that gives them confidence and a place to belong,” Francis said of the group that began less than a week after his son’s memorial service.

Crossen, who has been mentoring troubled teens for more than a decade, was asked to speak at Joshua’s memorial service last November. “Every time a kid took his life it really bothered me, it just ripped my guts out and I had to do something about it” he said. After being contacted by several other parents who also wanted to take action, Crossen,  along with the Francis family and Berthoud residents Kate Hudson, her son Gunnar, 14, Rhea Denney, Trent Maddex and daughter Taylyn, 16,  with the funds that were left over from Joshua’s memorial fund, began to put into motion the plans for J.O.S.H.

With the Berthoud Athletic Club donating their space for the group to meet, they were ready to begin their journey to reach the young people of Berthoud.

The group, which has now grown to more than 25 attendees, meets at 7 p.m. for “Wednesday Workouts” and for a variety of activities at different locations beginning at 3:30 p.m. at their “Sunday Gatherings”. Once a month, events that are “just for fun” are also planned and have included a trip to the Colorado Speedway and Fly High Trampoline Park. All of the events are free and, have so far, been paid for through donations.

The workouts consist of both group led instruction and free time for individuals to exercise how they prefer. Crossen leads the boxing and self-defense instruction, “He calls it boxing but it’s so much more than that, they’re learning about themselves physically and mentally” leader Trent Maddox said. Strength training, cardio, core-work, flexibility as well as breathing techniques and mindfulness exercises are also done.

“Exercising like this, boxing, is such a good way to get your emotions out, it’s an outlet,” said Taylyn Maddex, a student leader who manages the group’s social media and also produced a documentary about the group for a school project. Ethan Decoteau, 14, reiterated that sentiment, “Ever since my first time here I was just hooked – it just feels like everything gets lifted off your chest.”

“It’s not just about gaining physical strength but also mental strength and confidence” Francis said of the variety of activities that are provided for the kids to experience.

“Sunday Gatherings” have involved guest speakers on various topics including a police k-9 unit, drum circles, games, poetry, mock job interviews, guitar lessons, painting, writing and yoga to name a few. The group is in many ways shaped by its members as the leadership asks what interests individuals have and what they would like to experience.

Gunnar Hudson, one of the student leaders, described the affect the meetings have, “At our  Sunday Gatherings people walk in with their heads down and don’t come off as very confident, two hours later they’re smiling and shaking hands and…that has really helped people come out of the their shell”.

Opportunities called “Give-Backs” are also part of the J.O.S.H program, where members volunteer their time for various projects in the community. “It gives them a sense of that they are a part of this community, that they have purpose.” Francis said.

All of the leaders reiterate that they want everyone to feel welcome at the meetings regardless of their background. “These kids are coming because they feel like they belong to something which is what our intent was.”  Crossen said.

Much of the growth the group has seen since November has come from the efforts of the student leaders and participants encouraging others to come. “It’s nice to feel that we might help somebody. I would hate for Berthoud to go through something tragic again, it’s gone through a lot of hard times.”  Kenny Butterfield, 16, a regular attendee commented.

The kids all convene back in the open fitness room to work on core strength towards the end of their time at the gym.  As the group all support their body weight in a plank position, the leaders give words of encouragement, “keep pushing yourself, believe in yourself, don’t give up” can be heard throughout the room. Through a holistic approach to wellbeing, the leadership of J.O.S.H., who themselves chose to be warriors on behalf of the kids of Berthoud, have made it their mission to develop the warrior in each of the kids whose lives they touch, to help them believe that, no matter what life brings them, that they too can be, “invincible, unbeaten conquerors and defenders”.

If you are interested in getting involved by donating supplies, presenting or volunteering at a J.O.S.H. meeting please contact Scott Crossen at 303-775-1290 or JJ Francis at 970-818-1290. Monetary donations can be given at www.youcaring.com/joshjourneyofstrengthandhope-721352 For more information about J.O.S.H. visit www.facebook.com/groups/JourneyOfStrengthandHope/