It’s never too late to start something new

It’s rare to find someone who has a passion for something and pursues it. Christine Adams is such a person. Her passion is making stained glass creations.

She and her husband Rick moved back to the Berthoud area a little over a year ago. She has a full-time job but most weekends find her in her in-home studio. 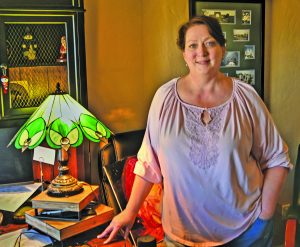 Adams says she didn’t grow up doing a lot of art. She took lessons in stain glass three years ago. “It happened very quickly,” Adams admits.

Her father worked at Kodak and was a wood sculptor. Adams says her dad did not start artwork until he retired at age 55. The Adams have some of his work at their home.

Lenahan says she always talked about wanting to take a stained-glass class. Dad said,” Why don’t you?” That led to Adams taking a beginner’s class. After making her first piece, Adams has just kept going, taking on more complex pieces.” It just kind of keeps growing from there,” she said.

Now, Adams creates complex windows using the copper foil method of stained glass. This entails carefully wrapping each little piece of glass with foil before soldering a group of pieces together.

Adams makes windows of various sizes. She thinks her largest was about 2 feet by 4 feet. She also makes suncatchers in different shapes. For the holidays, Adams is concentrating on “snowflake” suncatchers. She terms her workspace as being like Santa’s workshop during the snowflake-producing time of the year. Angels and heart suncatchers are popular too. Some of her window artwork have an Irish or Celtic theme.

Adams does some commission work. She calls this work “the most fun” since she gets to design pieces. Other times, Adams just makes a window that appeals to her but is for sale. She looks forward to doing the type of patterns that she likes to do. “I’m always thinking about the next thing,” Adams said enthusiastically. One wish is to try a large Tiffany-style lamp.

Adam’s future in stained glass is not clear other than she knows she will continue to do it. The holiday time keeps her so busy; she has to back off and not be overwhelmed or feel like it is a job she has to do. “There is so much to learn,” Adams said.

Adams believes it is never too late to start something new. She suggested finding a community of like-minded people. Spend time with them, she says.

When asked about advice for someone considering stained glass as a hobby, Adams says, “Go for it.” She acknowledges that it is an expensive hobby to get into. “If you do something that brings you joy, it makes life happier.” 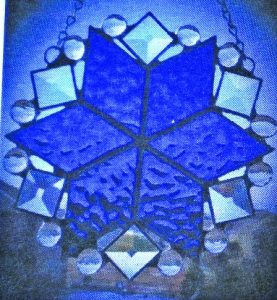 Adams added that she likes the aspect of stained glass where each piece is a surprise. As she works on something, cutting glass, foiling and soldering it becomes what she calls a present when completed. Seeing it in full light for the first time is what excites her.

Lenahan Art Glass creations can be seen at Morning Glory Café in Lafayette, Colorado. She is the only glass artist there. The Lincoln Gallery in Loveland also shows her artwork. Search Lenahan Art Glass to find the studio on Facebook.