More than 40 residents of the Berthoud Heights West and Hillsdale subdivisions were victims of a string of automobile break-ins. The target area included neighborhoods west and south of Berthoud High School. 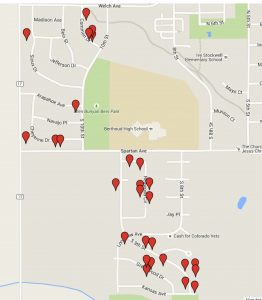 According to the Larimer County Sheriff’s Office, 43 incidents of vehicle trespass occurred in the two neighborhoods the night of July 8 and the early morning hours of July 9. Many of the offenses were reported by residents and others were discovered by deputies during their investigation.

The majority of vehicles that were entered didn’t have anything taken from them, the report stated. Items that were taken from some vehicles include small electronic devices and accessories.

Surprisingly, all of the vehicles that were unlawfully entered were left unsecured and were easily accessed by the suspect or suspects, according to a sheriff’s office press release.

One resident reported seeing four juveniles wearing hoodies, walking down a residential street trying to open the doors of parked vehicles, the report stated. “The resident confronted the juveniles and they ran from the area before the resident could get a better description of those they confronted.

The sheriff’s office reminds all residents to take precautionary measures to reduce the risk of vehicle break-ins. They advised residents to roll up windows, lock doors, and don’t leave valuables in plain sight inside the vehicle.

“Most criminals will not risk attracting attention by breaking a vehicle window unless they can see something they want to steal inside,” stated the release from Larimer County Sheriff’s Office spokesman David Moore.

The sheriff’s office also encourages residents to report any suspicious activity and to immediately call 911 if a crime is witnessed.

Investigators are also seeking any information related to this string of break-ins. Anyone with information can call Larimer County Sheriff’s Office at 970-416-1985 or remain anonymous by calling Larimer County Crime Stoppers at 970-221-6868.