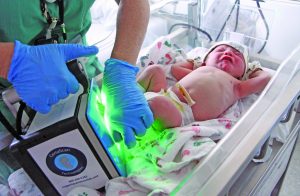 UCHealth Poudre Valley Hospital and UCHealth Medical Center of the Rockies are the first two hospitals in the state to use a new technology to electronically scan and create electronic identification records of babies’ feet. The hospitals are among 80 hospitals nationwide to offer the scans for newborns as an alternative to traditional ink and paper and inkless paper.

In July UCHealth contracted with CertaScan Technologies LLC, based in Fairfield, Conn., to conduct the scans, which not only provide a keepsake for parents’ baby books, but provide a bio identifier of the child and an added security measure to hospitals’ wristband alarm systems.

“It’s an extra level of security that we haven’t had before, and it’s immediately accessible,” said Laura Hall, clinical director for women and pediatric care for UCHealth in Northern Colorado.

Newborn footprints began to be recorded around 1960 using ink and paper, according to a New York Times article published in 1964. Poudre Valley Hospital and Medical Center of the Rockies also used ink and paper to capture babies’ footprints and the fingerprints of mothers, meeting state requirements to submit the information as part of hospital records to help prevent mix-ups in hospital nurseries.

The two hospitals found the electronic scans presented a quicker, cleaner process without the messiness of ink.

“They can smudge. They can break down,” Hall said about the ink images. “It’s not at the level of detail. It doesn’t last.”

The scans are conducted through LiveScan high-resolution image-capture technology using advanced scanning equipment and patent pending software. The technology, first installed in 2015, has been used to scan the feet of 200,000 babies so far.

To create the scans, a laptop scanner and screen are rolled into the delivery room where the baby’s foot is pressed against the screen and a scanned image is taken and automatically uploaded into the Cloud. The scan is of the ridge pattern of the baby’s foot — the pattern is similar to those of fingerprints, staying the same over time, though the space between the ridges may change.

“By using equipment utilizing LiveScan technology, we are able to pick up far more footprint ridge pattern detail than ink foot printing,” said David Yarnell, chief executive officer of CertaScan Technologies. “In the 1980s there were studies of ink foot printing that found out that less than five percent of the these footprints can actually be used for precise identification.”

Footprints are easier to capture than a baby’s handprint, since babies reflexively clench their fists when their palms are touched.

“It’s a quick, painless process,” Hall said, adding babies do not like to have their feet unwrapped or touching cold surfaces, so many of them cry during the scans. “It’s a small little box. It does light up when it’s scanning.”

The footprints, as well as the mother’s fingerprints and a forward-facing security photograph of the baby, are stored in the Cloud in a secured database and can later be used to help identify the baby in emergency situations — additional images can be uploaded with the baby’s growth. The scans become part of the mother’s electronic medical record and can be printed for hospital charts.

The scans, which meet HIPPA (Health Insurance Portability and Accountability Act) requirements, can be accessed through CertaScan by the hospital taking the footprint and the mother of the newborn. The scans also can be used in identification for forensic, missing persons (through the National Center for Missing and Exploited Children) and other emergency access, such as natural disasters and abandonment.

“For hospitals, the CertaScan system is more nurse-time efficient and also helps the hospital meet the guidelines of the National Center for Missing and Exploited Children,” Yarnell said. “CertaScan provides that extra layer of safety and security needed for newborns and young children in today’s world. If there is a child found anywhere, if that baby had been scanned at some hospital by the CertaScan system, that baby can be quickly precisely identified. Putting babies quickly back in their mom’s arms is a big deal.”

Once the scanned images are created, the mother receives a password and can go online to CertaScan’s website, www.firstfootprint.com, to get prints of the images. The images can be customized with fonts, colors and borders and the desired delivery information, such as birth date and time, weight and length.

The mothers can get as many prints as they desire at no cost but do have to provide their own ink and paper. They also receive a copy of “Baby’s First Footprint” with the delivery information and hospital logo.

“We really look at it as a gift we can give to families for a lifetime,” Hall said. “It’s a major part of baby books and something parents look forward to keeping. This way they have access to keepsakes and can make them their own.”

So far, PVH and MCR have taken 1,500 electronic scans — each year, the two hospitals average 4,000 deliveries a year. So far none of the mothers have declined the scans.

Angela Nickerson of Greeley is one of those parents who experienced the CertaScan technology with her daughter, Olivia Rose Martinez, born Dec. 27 at Medical Center of the Rockies.

“I absolutely loved it,” Nickerson said. “We got to keep a copy of her feet, but more importantly, her information is going to be stored in a database and given to law enforcement in case anything happens. It makes me feel very safe as a new mother.”