Welcome to another Berthoud Weather Nerd column! This time around we’ll be taking a look back over some of the local weather’s highs and lows of the past year. 2020 has been one for the books and the Berthoud climate has been no exception.

Colorado is no stranger to the changeable elements thanks to the moods of the jet stream above us, but this year had a few added weather surprises up its sleeve. As the state witnessed the biggest wildfires in its history and smoke filled the skies above Berthoud, high temperatures, strong winds, and little moisture became the clear theme of the year. 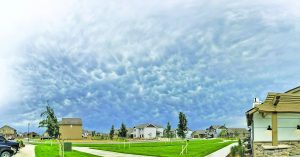 Photo by Lizzy Rogers – Mammatus clouds over Berthoud after a Derecho, June 6, 2020.

The National Weather Service has yet to release their state summary for 2020 but looking back over local weather data recorded by the Farmers Almanac for Berthoud there are already a few trends to spot in the provisional numbers. The main pattern is a much warmer year overall with every single month seeing higher than average maximum temperatures along with higher than average minimum temperatures.

The year is not quite over as I write this but I feel pretty confident in claiming July 10, 2020, as Berthoud’s hottest day of the year with a recorded 100.9°F (although a few local stations picked up a degree above that). Larimer County also had its warmest August on record, out of 126 years of data according to Dr. Becky Bolinger, Assistant State Climatologist for Colorado.

On the other end of the scale, Berthoud saw a pretty early cold dip as well. Predicting the coldest day of the year before it’s completely over could be asking for trouble but at the moment it’s looking like Oct. 27 will take the award with a chilly low of -7.6°F.

September might possibly go down as our craziest weather month of 2020. Not only did we see the record-breaking high for the month hit 100°F on Sept. 5, but then we had a dizzying drop only a few days later on Sept. 7 down to 0°F which brought with it the first snow of the season. This made it the earliest snowfall recorded in Berthouds 130-year weather data history, according to the Fort Collins climate center.

Jumps in temperature might be normal for our state but what was a little strange this year was a distinct lack of the severe weather we have come to expect around May to July. Big thunderstorms bringing damage-causing hail and the occasional tornado are something Coloradans have come to expect at the start of summer these days but this year we saw very little of either.

Colorado saw a total of 34 tornadoes in 2020, all on the weaker side of the scale, the most notable of which landed not too far from Berthoud on May 20 just 5 miles east of Greeley. 34 tornadoes may sound like more than enough to some but it’s a jump down from lasts year’s total of 50 and 2018’s total of 51.

The reason for this year’s lack of severe weather events, according to the Department of Atmospheric Science at Colorado State University, was due to a persistent ridge of high pressure that hung over Colorado in the early part of the year. The ridge apparently created a west or southwest flow in the upper atmosphere which does not typically bring the moisture and instability necessary for damaging hail or destructive tornadoes. However, what this flow can help develop in the spring and summer months is wind and that’s exactly what it did.

June 6 saw Colorado experience a rare record-breaking phenomenon called a Derecho. Defined as a long-lived line of severe thunderstorms that produces consistent wind damage along its path, Berthoud was hit by the storm’s powerful winds that gusted locally up to 57.42 mph making it the strongest winds of the year for us.

Berthoud saw around only 5.13 inches of rain over the whole year. A much lower total than the normal average of 16 inches. With those figures, it comes as little surprise that almost 25% of the state is currently classified in “exceptional” drought status. Weather predictions for the next few months are not optimistic, to put it lightly. Colorado is forecast to continue its drought-heavy status.

While the lack of tornadoes and storms created a quieter summer for local weather nerds and storm chasers, the rare Derecho busting through the state helped to keep us interested and it was definitely a highlight for me. All we can do now is hope for lots of snow this winter to get us out of the drought and look forward to whatever crazy things the Colorado weather wants to throw at us in 2021.