Former Berthoud Mayor David Gregg and his wife Stephanie wanted to start Berthoud-based Mission Homes Colorado for three reasons. “We wanted to do something different,” said Gregg, a longtime Berthoud resident temporarily living in Red Feather Lakes. “Corporate builders answer to the bottom line and their stockholders. We wanted to answer to our community by providing affordable homes, using local talent and giving back.”

That difference comes from the Gregg’s desire to keep the homes affordable, work with local companies, and donate a portion of the proceeds to local and worldwide nonprofits. 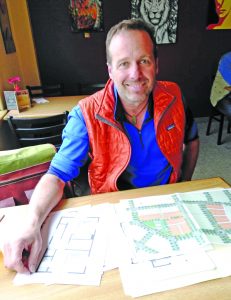 Photo by Shelley Widhalm – David Gregg, former Berthoud mayor, poses by some of his renderings May 1 for Berthoud-based Mission Homes Colorado, a homebuilding project he co-founded that gives 25 percent of proceeds to nonprofits.

“Having been in the industry as long as I have, it is definitely a risky business to be in,” said Gregg, who left a homebuilding company he co-founded in Boulder, Boulder Creek Builders, to focus on something smaller scale and that he and Stephanie found to be more meaningful. “We wanted there to be a purpose for the company beyond just building and selling homes.”

Gregg, who has a 30-year career in architecture, including 23 years in homebuilding, wanted to choose to build affordably for his next projects.

“Nobody else in the industry is doing that right now,” said Gregg, who oversees design and operations, and Stephanie, charitable giving and marketing. “It’s not a magical formula. It’s a choice you make.”

Gregg and Stephanie developed Mission Home Cottages as detached single-family cottages that are 950 to 1,200 square feet and two bedrooms on small lots, to keep them affordable. They are priced in the $200,000s, instead of being an average of 2,400 square feet and competing for buyers who will pay $300,000 to $400,000. The average new home in the 1950s was 950 square feet, and the Greggs want to return to that.

”We’re finding affordability through the size of the home, but we’re not cutting into any of the quality. They’ll be the least expensive homes on the market, not the cheapest,” Gregg said.

The Greggs, who began the project in December 2017, will build their homes within larger master-planned communities. Their first project will be 52 homes on lots in the 800-home Prairie Star subdivision in Berthoud, slated to be completed by mid-July, with amenities like a pocket park, and a clubhouse and pool. Future projects will be in Berthoud and Larimer County.

“We have at least one future development with as many lots, if not more,” Gregg said.

The Greggs will keep the homes affordable in other ways, such as keeping the overhead small and working with a team of chosen professionals, which they prefer to keep local. For the Prairie Star project, the Greggs are working with custom home builders Berthoud Builders as the general contractor, Re/Max Town & Country as the real estate agent, and EnergyLogic on energy compliance.

“We were excited about that opportunity, being able to bring something more affordable to the market,” said Buddy Kouns, co-owner of Berthoud Builders with his father Bob and two brothers, K.C. and Chris. “Just because they are smaller doesn’t mean we need to sacrifice quality. … It’s a custom house, but a little smaller. … When David talked about giving back and the charitable side of things it made it even better.”

Gregg wanted to keep his business local after spending time in Berthoud. He served as mayor of Berthoud from 2012 to 2016 and a total of 12 years in town government as mayor, mayor pro-tem and town trustee.

“Some of that desire came from my time on the town board, wanting to see local communities thrive,” Gregg said. “The large corporate builders bring crews from Denver to build in Berthoud. That doesn’t do much for our economy.”

The Greggs will donate 25 percent of their profits to nonprofits locally in Berthoud and worldwide that focus on helping the needy. They will work with a future board to identify some of the organizations, and the homebuyers will decide on the rest. The homebuyers will be given a list of the Berthoud nonprofits and will be able to select where to give their portion of the profits.

“What I really look forward to is closing on a home and moving a family in who didn’t have another option to be able to provide that home, that American dream,” Gregg said.

The Greggs have always had a “heart for philanthropy and giving to those in need. We thought it was a beautiful combination to use our time, treasure and talent in that way,” Stephanie said. “It seems like a lot of our friends and families have a hard time affording a home in this marketplace. We wanted to build something that helped people with simpler, de-cluttered lives that not only fits their wallets but fits their active lifestyles