Tom McCaffrey likes to tell people he’s in the witness protection program and some people understandably believe him. After working for 35 years as an entertainment industry litigation lawyer in New York City he and his wife Lisa relocated to the outskirts of Berthoud in 2017. An extreme change of pace for sure. And now, he is shifting gears again and embarking on another new adventure as his first novel “The Wise Ass” published by Black Rose Writing will be released Feb. 18. 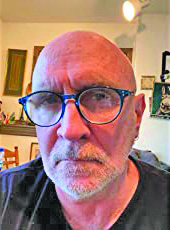 The book, a legal thriller of sorts, as it is much more than that, is currently trending on Amazon’s Hot New Releases and is sure to take readers on a wild ride that includes many locations Berthodites will find very familiar as much of the book was inspired from his experiences here as well as New York.

In the book, a New York mob lawyer’s brothers are killed prompting him to testify against his associates and is forced to enter the Witness Protection Program.  He and his wife are relocated to a small town in Colorado where he attempts to adapt to his new life under the constant threat of mafia reprisal. And as the book’s description continues, “Reflexively resisting his immersion into all things country, this life long city boy meets and adopts a loquacious mule and befriends his closest neighbors, who have even greater secrets to conceal.” When the mob associates are released from custody and come looking for revenge “Wise Guys” meet the “Wise Ass” and all heck breaks loose.

Speaking on his early days in Berthoud and the genesis of the book McCaffrey said, “When I first got here it was like life on Mars everything was so different.” Mentioning phenomena like people you don’t know greeting you with a wave as you pass by, a custom he has since adopted. He continued, “It was a big transition and that’s what led to writing the novel.”

Unable to adjust to Mountain Time, as he had lived on Eastern Time since he was a kid growing up in the Bronx, as the heavy accent would attest, he found himself waking up as early as 2 a.m. to begin writing. Incredibly, once he sat down to write the book after mauling the idea of it around in his head for a year, it only took three months to complete.

Claire, who is a real-life mule and McCaffrey’s muse for the novel is featured in the book as well as on the book’s cover, a photograph taken by a friend Kathy Fronsdahl whose husband Jim edited the book. He said when he moved here he started walking in his rural neighborhood and began to befriend his neighbors’ animals. Horses, alpacas, and other animals took an occasional interest in the lone figure passing by early in the morning. But, one animal, in particular, would never fail to be at the fence to greet him, Claire the mule. After some time Claire’s family gave her to McCaffrey and the frie 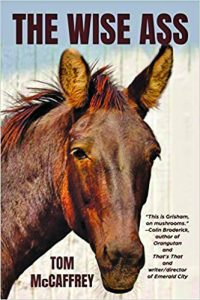 ndship and bond the two have continues to grow. “She has a big personality,” he said, as he explained she will stare through his office window and if he doesn’t take a hint and bring her carrots his loveable “wise ass” will use the restroom outside the window in protest, “You pay a bribe it’s like everything else it makes the world go round.”

Truth is often stranger than fiction and although the book is a work of fiction all of the characters are based on real people or animals. A renegade US Marshall, a lesbian couple that includes a powerful psychic-medium-witch and an ex-army ranger all make appearances in the novel as well. “There are dead people, psychics, extraterrestrials it’s got a lot going on,” he explained.

McCaffery commented that the book has three pages of acknowledgments as anyone who made their way into his book, including his neighbors and many other Berthoud locals, all got a nod for their contributions to his creative endeavor.

McCaffrey has settled into life in Berthoud and enjoys frequenting the Berthoud Habitat for Humanity Restore and Mr. Thrift for inspiration and hanging out with the folks at Grandpa’s Café and visits A&W (which is in the novel) for their Beyond Burgers as he’s a vegetarian.

When asked why he would like people to take from the book he said, “My hope is that people will spend a few days of their life having a good time…when they finish they go man I had a great time and when they get to the end they think “shoot it’s ending.””

The good news is if you do finish the book wanting more, two more books are on the way to round out the trilogy.

“The Wise Ass” is available everywhere books are sold including Amazon and Barnes & Noble.