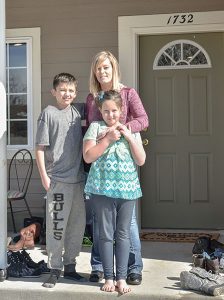 Jamie, Jayden, and Mackenzie on dedication day, 10 days after moving in to their new home in Berthoud.
Katie Harris / The Surveyor

Dozens of friends, neighbors, board members and volunteers turned out for the dedication ceremony of the ninth Habitat for Humanity home to be completed in Berthoud on Feb. 25.

The ceremony itself was succinct, with the dedication offered by Berthoud Habitat president, Ricardo Haskins, followed by a prayer led by Kim Land, former pastor at Grace Place Church and longtime friend of Jamie Boller, recipient of the house.

Before and after the dedication, guests toured the home, admiring the work of countless volunteers, enjoying light refreshments, and getting to know the family who will now call Berthoud home.

Thanks to the efforts of many of those guests, Boller’s dream of home ownership has finally come true.

She and her two children, 14-year-old Jayden and 8-year-old Mackenzie, had their world turned upside down three years ago when her fiancé passed away suddenly. Faced with a single income, Boller and her children moved into a spare bedroom in her grandfather’s house in Campion, where living conditions for the four of them were cramped at best.

When Boller learned about the Habitat program in Berthoud she wasted no time in applying. After being accepted, she and her children began helping to build the house that would someday be their own.

Twenty years ago, when a small group of Berthoudites met at a local church, they had no idea their desire to put their faith into action would lead to a program that would help so many.

Though their backgrounds and professions varied, the group’s vision was the same – they wanted to bring affordable, decent housing to Berthoud, and they saw the international Habitat for Humanity organization as a path to achieving this mission.

“In the beginning it was tough,” said Haskins, who was one of the original founders. “There weren’t a lot of grants available back then, and we didn’t have the community connections that we do now.”

It took two years before a generous donation from a renowned local family ensured the Berthoud affiliate would be a success.

“Doc and Helen Fickel offered to donate the funds so that we could purchase the land on Fourth Street,” said Haskins. “At that point we knew it might take awhile, but we were going to make it.”

Berthoud Habitat spent the next several years working with the town to incorporate and subdivide the land, choosing a family to receive the first home, and beginning building.

In 2003 the inaugural home was finished, and the Alameida family became the first to receive a Habitat home in Berthoud.

After that, Haskins said the organization chugged along but, due to complete reliance on donations and volunteers, was lucky to complete one to two houses every couple years.

In 2005 the board looked into funding options. The ReStore in Berthoud was opened, which would go on to fund one house per year. Thanks to the approval of the Berthoud program as an affiliate by the international organization, grants were available to help pay for subcontractors to perform the electric and plumbing portions of the homes, speeding up the entire process.

In addition, the organization began making connections within the community. Before long students from the Geometry in Construction program at Loveland High School, AmeriCorps volunteers, and other local and national groups had offered to help with building, and houses were able to be completed much more quickly, between two and three new homes per year.

In its 20th year, the local affiliate can proudly say its building timeline is faster than ever, with its ninth home completed and 10th, 11th and 12th underway.

It takes a village

As fast as Berthoud Habitat is growing, the need for affordable housing in town is keeping pace.

“We continue to seek volunteers both at the construction sites and at the local ReStore,” said Program manager of Berthoud Habitat, Jan Dowker. “We are especially in need of volunteers with building experience and licensed subcontractors who would be willing to donate their time.”

Dowker said the organization also welcomes monetary and ReStore donations, and can always use building and landscape materials, such as windows, roofing supplies and paint. She said this was an area in which local businesses had been especially generous, referencing a recent donation of cabinets by Aspen Leaf Kitchens, which were installed in Boller’s home.

Aside from the homes under construction on Fourth Street, nine more lots are still available at that site for future building. While those lots should keep the organization busy for several years to come, Dowker said the group can use any and all land donations as a bank for future sites.

She also encouraged community members to attend the affiliate’s Casino Night and Auction in May at Brookside Gardens and the Berthoud Day 5K in June, the profits of which are returned to Habitat to support local building efforts.

“Any donations received help offset costs for things like road paving, sewer and water taps, and subcontractor services which are not covered by grants,” said Dowker. “This is a great organization, and we want to invite the Berthoud community to get involved!” 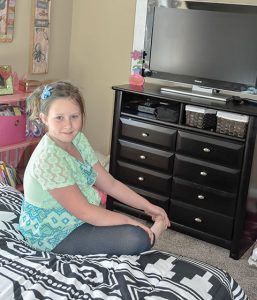 MacKenzie, 8, enjoys having her own bedroom and a “big TV”.
Katie Harris / The Surveyor

A house becomes a home

After a year of painting, putting up siding, sweeping, and picking up nails, work performed by all families who are accepted for the Habitat program, the Boller family can finally relax and enjoy their small slice of heaven.

“This feels like home now,” said Boller. “I finally sleep well at night and can stretch out in my own bed.”

Mackenzie, who wasted no time in identifying her favorite part of the house as the large flat-screen TV in her bedroom, said everything about her new home is perfect.

“I was screaming and yelling when I first saw the house!” said the 8-year-old. “I’ve always wanted a basement and stairs!”

For Jayden, having his own space and not having to share a bedroom with the other members of his family is a dream come true. He said the Broncos decor on display throughout his room makes it feel like home.

Another aspect of their new home stood out as a big hit with the younger family members.

“When we first got here we started sliding and belly-flopping all over the floor,” said Jayden and Mackenzie in unison. “We’d never had hardwood floors before.”

Boller said for her the best part of moving in to their new home has been the kids’ excitement.

“The whole time we were waiting for the house to be finished the kids called it the “habitat house,’” she said. “Now they finally call it home.”