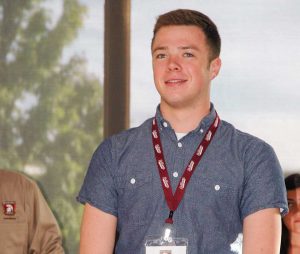 As per its mission statement, the Berthoud Sports Hall of Fame has been established to recognize excellence in sports and athletics by individuals associated with Berthoud and is committed to acknowledging people who have been a shining example of outstanding sportsmanship both in competition and in life.

“The Berthoud Sports Hall of Fame allows us to give just recognition to athletes and coaches of years past who have made outstanding contributions to both the world of sports and Berthoud community,” said Hall of Fame voting committee member and treasurer, Dan Karpiel.

The HOF not only recognized its inductees of 2015, but honored Berthoud prep athletes for their achievements over the course of the 2014-15 school year. Six scholarships were given away and all of The Berthoud Weekly Surveyor’s Athletes of the Week were individually honored.

BHS senior, and Thompson Valley swimmer Jack Thorne and cross country and track and field athlete Kiah Leonard were honored as the Berthoud Weekly Surveyor Athletes of the Year and each received a $500 scholarship courtesy of Affordable Roofing & Restoration.

“Our hope is that honoring these individuals for their accomplishments on and off the field can help inspire future generations to follow in their footsteps,” Karpiel said.

The HOF added two new scholarships this year; the Angelo Dabbiero Courage Scholarship, given to a student athlete who has demonstrated courage in the face of adversary, and presented by 2014 inductees and Paralympians Tyler Carron and Nikko Landeros.

Dabbiero’s namesake scholarship was given to Berthoud wrestler Colin Leypolt, whose courageous battle in the face of Fahr’s Syndrome has served as an inspiration to all those with whom he has come in contact.

And the Derek Good Scholarship, presented by 2014 HOF inductee Derek Good, was presented to BHS senior football player and wrestler Matt Bonds for being.

“Adding these awards and two more scholarships to this year’s event makes the HOF dinner and awards ceremony even that much more special,” said John Hall, Chairman of the Berthoud Sports Hall of Fame. “To hear the stories and see the humility of the inductees who make up some of Berthoud’s greatest sports figures was inspiring and hopefully the 39 BHS student athletes who were present can use the example of the Hall of Famers as their own measuring stick in leadership.”