While he was always drawn to service – as part of a military family, it’s in his DNA – Zach Anderson, Deputy in the Berthoud Squad of the Larimer County Sheriff’s Office (LCSO), was drawn to law enforcement for reasons beyond service.

A Colorado native, Deputy Anderson worked in Larimer County Natural Resources as a park ranger before joining the LCSO. Already familiar with their work from crossing paths with deputies numerous times, Anderson did some volunteer work for the LCSO and was hooked, he officially joined as a Deputy in Sept. 2017.

“The biggest draw I think is having days that are never the same, always being able to help people, the opportunity to work with hundreds of different people,” Anderson explained. When he originally started with the LCSO, Anderson was assigned to a patrol section in northeast Fort Collins. 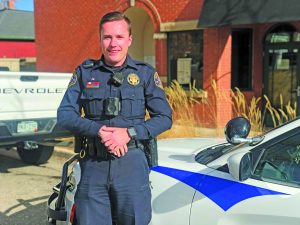 Asked if the job has been what he expected, he answered in the affirmative, saying his interactions with LCSO and other law enforcement agencies during his time as a park ranger gave him a clear understanding of what to expect going in.

Said Anderson, “It’s definitely what I thought it was, it’s not like “Cops” on TV, that cool factor, it’s definitely been what I expected but there’s obviously days where we get a tricky case where it’s something you have to dig into when you didn’t really expect to have to. The job brings something different every day, something new every day.” He went on to explain that, with every day being something different, going to work never gets old and he foresees himself remaining in law enforcement for the duration of his prime working years.

Anderson joined the Berthoud squad of the LCSO exactly two years ago, in Jan. 2019, and has loved his work in town but admits that, like any jurisdiction, there are challenges. “You’re just seeing a town that’s growing and, I don’t want to call them growing pains, but they’re the things that come along with a town getting bigger.”

“The challenges are the common things that unfortunately come along with areas that grow with new construction, a lot of property crime, trailer theft, construction burglaries, it’s not the community but it’s an opportunity with a couple of major highways intersecting here, it’s easy for a criminal to see a construction area and go there,” Anderson said.

Said Anderson, “There’s more of a community feel here than working a hotel corridor … this is more of an opportunity to work with residents and get to know them in a more concentrated area.” Anderson explained that working in Berthoud has more personal interaction with the public than in his prior position in Fort Collins. “There’s a little bit more of a connection with it, there’s a lot more interaction with the residents.”

One of the benefits of working in a smaller town, Anderson said, is that much of the citizenry actively assist law enforcement when it comes to their jobs. People know their neighbors and their neighborhoods; they are able to quickly notice when something is amiss. “A lot of this job is reactive, being a small community people are a lot more open to help solve crimes,” he said.

As Anderson explained, “A lot of the people that live here are very connected and very involved in the community which ends up helping us out a lot. The citizens have more eyes than we do, they live in a certain area and know their neighborhood so when they see something suspicious or something off, they help solve crimes.”

Anderson said that the community involvement in Berthoud makes the job more enjoyable and more rewarding. As he explained, “the community feel of it, work an area where you know you’re making difference because you can see it through the interactions and conversations you have with people.”

Anderson explained that recent controversies surrounding law enforcement in the United States have not changed the way he goes about his job. “No, obviously it reinforces the aspect that we’re not here to be against the community but that this is a partnership with the community,” Anderson said. “I think it was just unfortunate that you get a bad egg that does things that aren’t appropriate or are illegal and people see that person as a police officer or a sheriff deputy and then, unfortunately, get into that stereotype that that’s every officer,”

Deputy Anderson attended both the Back the Blue and Black Lives Matter rallies in Berthoud this past summer. He was candid in explaining that he came away from both events with a better understanding of the views of the attendees, on all sides, and said he viewed his experiences at both events positively.

“It was definitely productive to have those conversations with passionate people who live in town or who live in the county, it got us to look at stuff on our side us but it also helped them get an explanation as to why we do certain things or just give them a chance to vent about some of what they were seeing across the county,” Anderson said of his discussions with attendees at the rallies. “We need to have those conversations and sometimes they’re tough conversations to one make change and but also to keep us along the lines that law enforcement is ever-changing and fluid and sometimes it takes speaking with citizens that we need to look at the way we’re doing something or even just explaining why we do things the way we do.”

Anderson said that even months later, as things have cooled down somewhat that he is still approached by people who have questions about one thing or another related to policing. The Deputy said he welcomes these conversations and would encourage citizens to reach out with any questions, concerns or comments they may have.

“We still get people coming up to us and asking us questions and that’s certainly something we want to encourage because, you know, we’re people too even though we wear this uniform,” he said. “It’s definitely a good town to work in, those relationships are strong and obviously we want to keep it that way so if people have questions or just want to come down and chat or stop us when they see us out, please do so.”